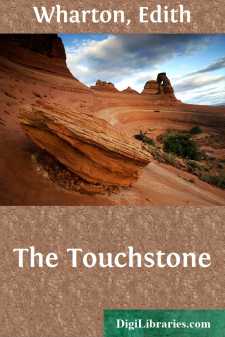 Professor Joslin, who, as our readers are doubtless aware, is engaged in writing the life of Mrs. Aubyn, asks us to state that he will be greatly indebted to any of the famous novelist's friends who will furnish him with information concerning the period previous to her coming to England. Mrs. Aubyn had so few intimate friends, and consequently so few regular correspondents, that letters will be of special value. Professor Joslin's address is 10 Augusta Gardens, Kensington, and he begs us to say that he "will promptly return any documents entrusted to him."

Glennard dropped the Spectator and sat looking into the fire. The club was filling up, but he still had to himself the small inner room, with its darkening outlook down the rain-streaked prospect of Fifth Avenue. It was all dull and dismal enough, yet a moment earlier his boredom had been perversely tinged by a sense of resentment at the thought that, as things were going, he might in time have to surrender even the despised privilege of boring himself within those particular four walls. It was not that he cared much for the club, but that the remote contingency of having to give it up stood to him, just then, perhaps by very reason of its insignificance and remoteness, for the symbol of his increasing abnegations; of that perpetual paring-off that was gradually reducing existence to the naked business of keeping himself alive. It was the futility of his multiplied shifts and privations that made them seem unworthy of a high attitude; the sense that, however rapidly he eliminated the superfluous, his cleared horizon was likely to offer no nearer view of the one prospect toward which he strained. To give up things in order to marry the woman one loves is easier than to give them up without being brought appreciably nearer to such a conclusion.

Through the open door he saw young Hollingsworth rise with a yawn from the ineffectual solace of a brandy-and-soda and transport his purposeless person to the window. Glennard measured his course with a contemptuous eye. It was so like Hollingsworth to get up and look out of the window just as it was growing too dark to see anything! There was a man rich enough to do what he pleased—had he been capable of being pleased—yet barred from all conceivable achievement by his own impervious dulness; while, a few feet off, Glennard, who wanted only enough to keep a decent coat on his back and a roof over the head of the woman he loved, Glennard, who had sweated, toiled, denied himself for the scant measure of opportunity that his zeal would have converted into a kingdom—sat wretchedly calculating that, even when he had resigned from the club, and knocked off his cigars, and given up his Sundays out of town, he would still be no nearer attainment.

The Spectator had slipped to his feet and as he picked it up his eye fell again on the paragraph addressed to the friends of Mrs. Aubyn. He had read it for the first time with a scarcely perceptible quickening of attention: her name had so long been public property that his eye passed it unseeingly, as the crowd in the street hurries without a glance by some familiar monument....