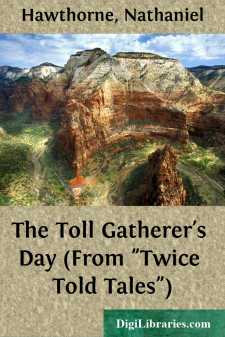 Methinks, for a person whose instinct bids him rather to pore over the current of life, than to plunge into its tumultuous waves, no undesirable retreat were a toll-house beside some thronged thoroughfare of the land. In youth, perhaps, it is good for the observer to run about the earth, to leave the track of his footsteps far and wide,—to mingle himself with the action of numberless vicissitudes,—and, finally, in some calm solitude, to feed a musing spirit on all that lie has seen and felt. But there are natures too indolent, or too sensitive, to endure the dust, the sunshine, or the rain, the turmoil of moral and physical elements, to which all the wayfarers of the world expose themselves. For such a mail, how pleasant a miracle, could life be made to roll its variegated length by the threshold of his own hermitage, and the great globe, as it were, perform its revolutions and shift its thousand scenes before his eyes without whirling him onward in its course. If any mortal be favored with a lot analogous to this, it is the toll-gatherer. So, at least, have I often fancied, while lounging on a bench at the door of a small square edifice, which stands between shore and shore in the midst of a long bridge. Beneath the timbers ebbs and flows an arm of the sea; while above, like the life-blood through a great artery, the travel of the north and east is continually throbbing. Sitting on the aforesaid bench, I amuse myself with a conception, illustrated by numerous pencil-sketches in the air, of the toll-gatherer's day.

In the morning—dim, gray, dewy summer's morn the distant roll of ponderous wheels begins to mingle with my old friend's slumbers, creaking more and more harshly through the midst of his dream, and gradually replacing it with realities. Hardly conscious of the change from sleep to wakefulness, he finds himself partly clad and throwing wide the toll-gates for the passage of a fragrant load of hay. The timbers groan beneath the slow-revolving wheels; one sturdy yeoman stalks beside the oxen, and, peering from the summit of the hay, by the glimmer of the half-extinguished lantern over the toll-house, is seen the drowsy visage of his comrade, who has enjoyed a nap some ten miles long. The toll is paid,—creak, creak, again go the wheels, and the huge haymow vanishes into the morning mist. As yet, nature is but half awake, and familiar objects appear visionary. But yonder, dashing from the shore with a rattling thunder of the wheels and a confused clatter of hoofs, comes the never-tiring mail, which has hurried onward at the same headlong, restless rate, all through the quiet night. The bridge resounds in one continued peal as the coach rolls on without a pause, merely affording the toll-gatherer a glimpse at the sleepy passengers, who now bestir their torpid limbs, and snuff a cordial in the briny air. The morn breathes upon them and blushes, and they forget how wearily the darkness toiled away. And behold now the fervid day, in his bright chariot, glittering aslant over the waves, nor scorning to throw a tribute of his golden beams on the toll-gatherer's little hermitage. The old man looks eastward, and (for he is a moralizer) frames a simile of the stage coach and the sun. While the world is rousing itself, we may glance slightly at the scene of our sketch. It sits above the bosom of the broad flood, a spot not of earth, but in the midst of waters, which rush with a murmuring sound among the massive beams beneath. Over the door is a weather-beaten board, inscribed with the rates of toll, in letters so nearly effaced that the gilding of the sunshine can hardly make them legible. Beneath the window is a wooden bench, on which a long succession of weary wayfarers have reposed themselves. Peeping within doors, we perceive the whitewashed walls bedecked with sundry lithographic prints and advertisements of various import, and the immense showbill of a wandering caravan. And there sits our good old toll-gatherer, glorified by the early sunbeams. He is a man, as his aspect may announce, of quiet soul, and thoughtful, shrewd, yet simple mind, who, of the wisdom which the passing world scatters along the wayside, has gathered a reasonable store.

Now the sun smiles upon the landscape, and earth smiles back again upon the sky. Frequent, now, are the travellers. The toll-gatherer's practised ear can distinguish the weight of every vehicle, the number of its wheels, and how many horses beat the resounding timbers with their iron tramp. Here, in a substantial family chaise, setting forth betimes to take advantage of the dewy road, come a gentleman and his wife, with their rosy-cheeked little girl sitting gladsomely between them....