The Toilers of the Field 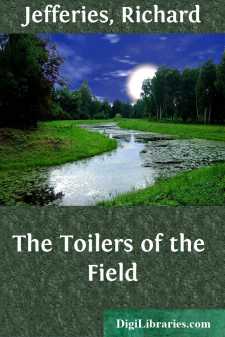 THE FARMER AT HOME.

The new towns, or suburbs which spring up every year in the neighbourhood of London, are all built upon much the same plan. Whole streets of houses present exact duplicates of each other, even to the number of steps up to the front door and the position of the scraper. In the country, where a new farmhouse is erected about once in twenty years, the styles of architecture are as varied and as irregular as in town they are prim and uniform. The great mass of farmhouses are old, and some are very picturesque. There was a farmhouse I knew which was almost entitled to be taken as the type of an English rural homestead. It was built at a spot where the open wild down suddenly fell away into rich meadow land. Here there was a narrow steep-sided valley, or "combe"—and at the mouth of this, well sheltered on three sides from the north, the east, and north-eastern winds, stood the homestead. A spring arose some way behind, and close to the house widened into a pool which was still further enlarged by means of a dam, forming a small lake of the clearest water. This lake fed a mill-race lower down. The farmyard and rick-barton were a little way up the narrow valley, on one side of which there was a rookery. The house itself was built in the pure Elizabethan style; with mullioned windows, and innumerable gables roofed with tiles. Nor was it wanting in the traditions of the olden time. This fine old place was the homestead of a large farm comprising some of the best land of the district, both down and meadow. Another farmhouse, still used for that purpose, stands upon the wildest part of the down, and is built of flint and concrete. It was erected nearly three hundred years ago, and is of unusual size. The woodwork is all solid black oak, good enough for an earl's mansion.

These are specimens of the highest class of farmhouse. Immediately beneath them come the houses built in the early part of the present century. They vary in almost every architectural detail, and the materials differ in each county; but the general arrangement is the same. They consist as it were of two distinct houses under one roof. The front is the dwelling-house proper, usually containing a kitchen, sitting-room, and parlour. The back contains the wood-house (coal-house now), the brewhouse—where the beer was brewed, which frequently also had an oven—and, most important of all, the dairy. All this part of the place is paved with stone flags, and the dairy is usually furnished with lattice-work in front of the windows, so that they can be left open to admit the cool air and not thieves. Coolness is the great requisite in a dairy, and some gentlemen who make farming a science go to the length of having a fountain of water constantly playing in it. These houses, however, were built before scientific agriculture was thought of. The wood-house contained the wood used for cooking and domestic purposes; for at that date wood was universally used in the country, and coal rarely seen. The wood was of course grown on the farm, for which purpose those wide double mound hedges, now rapidly disappearing, were made....