The Title A Comedy in Three Acts 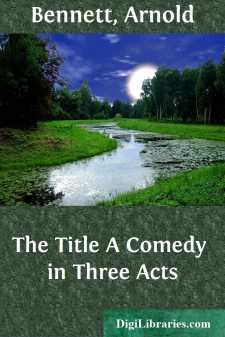 Hildegarde is sitting at a desk, writing . John, in a lounging attitude, is reading a newspaper .

HILDEGARDE ( turning slightly in her seat and giving him her left hand, the right still holding a pen ). Good evening. Excuse me one moment.

TRANTO. All right about my dining here to-night? (Hildegarde nods .) Larder equal to the strain?

TRANTO. Great heavens! ( imitates sketchily the motions of cutting up a piece of steak. Shaking hands with John, who has risen ). Well, John. How are things? Don't let me disturb you. Have a cigarette.

JOHN ( flattered ). Thanks. ( As they light cigarettes .) You're the first person here that's treated me like a human being.

JOHN. Yes. They all treat me as if I was a schoolboy home for the hols.

TRANTO. But you are, aren't you?

TRANTO ( sympathetically ). You mean that a schoolboy home for the hols isn't necessarily something escaped out of the Zoo.

TRANTO. In fact, what you mean is you're really an individual very like the rest of us, subject, if I may say so, to the common desires, weaknesses and prejudices of humanity—and not a damned freak.

JOHN ( brightly ). That's rather good, that is. If it's a question of the Zoo, what I say is—what price home? Now, homes are extraordinary if you like—I don't know whether you've ever noticed it. School—you can understand school. But home—! Strange things happen here while I'm away.

HILDEGARDE ( without looking round ). Oh yes he can.

JOHN ( pretending to start back ). Stay me with flagons! ( Resuming to Tranto.) And you're something new here since the summer holidays.

TRANTO. I never looked at myself in that light. But I suppose I am rather new here.

JOHN. Not quite new. But you've made a lot of progress during the last term.

JOHN. You understand what I mean. You were rather stiff and prim in August—now you aren't a bit.

JOHN. The Echo ? I don't know what to think. You see, we don't read newspapers much at school. Some of the masters do. And a few chaps in the Fifth—swank, of course. But speaking generally we don't. Prefects don't. No time.

TRANTO. How strange! Aren't you interested in the war?

JOHN. Interested in the war! Would you mind if I spoke plainly?

TRANTO. I should love it.

JOHN. Each time I come home I wonder more and more whether you people in London have got the slightest notion what war really is. Fact! At school, it's just because we are interested in the war that we've no time for newspapers.

JOHN. How's that? Well, munition workshops—with government inspectors tumbling all over us about once a week....