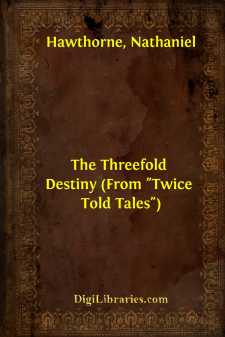 I have sometimes produced a singular and not unpleasing effect, so far as my own mind was concerned, by imagining a train of incidents, in which the spirit and mechanism of the fairy legend should be combined with the characters and manners of familiar life. In the little tale which follows, a subdued tinge of the wild and wonderful is thrown over a sketch of New England personages and scenery, yet, it is hoped, without entirely obliterating the sober hues of nature. Rather than a story of events claiming to be real, it may be considered as an allegory, such as the writers of the last century would have expressed in the shape of an Eastern tale, but to which I have endeavored to give a more life-like warmth than could be infused into those fanciful productions.

In the twilight of a summer eve, a tall, dark figure, over which long and remote travel had thrown an outlandish aspect, was entering a village, not in "Fairy Londe," but within our own familiar boundaries. The staff, on which this traveller leaned, had been his companion from the spot where it grew, in the jungles of Hindostan; the hat, that overshadowed his sombre brow, had shielded him from the suns of Spain; but his cheek had been blackened by the red-hot wind of an Arabian desert, and had felt the frozen breath of an Arctic region. Long sojourning amid wild and dangerous men, he still wore beneath his vest the ataghan which he had once struck into the throat of a Turkish robber. In every foreign clime he had lost something of his New England characteristics; and, perhaps, from every people he had unconsciously borrowed a new peculiarity; so that when the world-wanderer again trod the street of his native village, it is no wonder that he passed unrecognized, though exciting the gaze and curiosity of all. Yet, as his arm casually touched that of a young woman, who was wending her way to an evening lecture, she started, and almost uttered a cry.

"Ralph Cranfield!" was the name that she half articulated.

"Can that be my old playmate, Faith Egerton?" thought the traveller, looking round at her figure, but without pausing.

Ralph Cranfield, from his youth upward, had felt himself marked out for a high destiny. He had imbibed the idea—we say not whether it were revealed to him by witchcraft, or in a dream of prophecy, or that his brooding fancy had palmed its own dictates upon him as the oracles of a Sibyl—but he had imbibed the idea, and held it firmest among his articles of faith, that three marvellous events of his life were to be confirmed to him by three signs.

The first of these three fatalities, and perhaps the one on which his youthful imagination had dwelt most fondly, was the discovery of the maid, who alone, of all the maids on earth, could make him happy by her love. He was to roam around the world till he should meet a beautiful woman, wearing on her bosom a jewel in the shape of a heart; whether of pearl, or ruby, or emerald, or carbuncle, or a changeful opal, or perhaps a priceless diamond, Ralph Cranfield little cared, so long as it were a heart of one peculiar shape. On encountering this lovely stranger, he was bound to address her thus: "Maiden, I have brought you a heavy heart. May I rest its weight on you?" And if she were his fated bride,—if their kindred souls were destined to form a union here below, which all eternity should only bind more closely,—she would reply, with her finger on the heart-shaped jewel, "This token, which I have worn so long, is the assurance that you may!"

And, secondly, Ralph Cranfield had a firm belief that there was a mighty treasure hidden somewhere in the earth, of which the burial-place would be revealed to none but him. When his feet should press upon the mysterious spot, there would be a hand before him, pointing downward,—whether carved of marble, or hewn in gigantic dimensions on the side of a rocky precipice, or perchance a hand of flame in empty air, he could not tell; but, at least, he would discern a hand, the forefinger pointing downward, and beneath it the Latin word EFFODE,—Dig!...