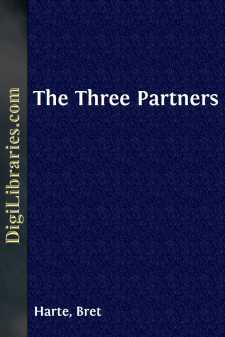 The sun was going down on the Black Spur Range. The red light it had kindled there was still eating its way along the serried crest, showing through gaps in the ranks of pines, etching out the interstices of broken boughs, fading away and then flashing suddenly out again like sparks in burnt-up paper. Then the night wind swept down the whole mountain side, and began its usual struggle with the shadows upclimbing from the valley, only to lose itself in the end and be absorbed in the all-conquering darkness. Yet for some time the pines on the long slope of Heavy Tree Hill murmured and protested with swaying arms; but as the shadows stole upwards, and cabin after cabin and tunnel after tunnel were swallowed up, a complete silence followed. Only the sky remained visible—a vast concave mirror of dull steel, in which the stars did not seem to be set, but only reflected.

A single cabin door on the crest of Heavy Tree Hill had remained open to the wind and darkness. Then it was slowly shut by an invisible figure, afterwards revealed by the embers of the fire it was stirring. At first only this figure brooding over the hearth was shown, but as the flames leaped up, two other figures could be seen sitting motionless before it. When the door was shut, they acknowledged that interruption by slightly changing their position; the one who had risen to shut the door sank back into an invisible seat, but the attitude of each man was one of profound reflection or reserve, and apparently upon some common subject which made them respect each other's silence. However, this was at last broken by a laugh. It was a boyish laugh, and came from the youngest of the party. The two others turned their profiles and glanced inquiringly towards him, but did not speak.

"I was thinking," he began in apologetic explanation, "how mighty queer it was that while we were working like niggers on grub wages, without the ghost of a chance of making a strike, how we used to sit here, night after night, and flapdoodle and speculate about what we'd do if we ever DID make one; and now, Great Scott! that we HAVE made it, and are just wallowing in gold, here we are sitting as glum and silent as if we'd had a washout! Why, Lord! I remember one night—not so long ago, either—that you two quarreled over the swell hotel you were going to stop at in 'Frisco, and whether you wouldn't strike straight out for London and Rome and Paris, or go away to Japan and China and round by India and the Red Sea."

"No, we didn't QUARREL over it," said one of the figures gently; "there was only a little discussion."

"Yes, but you did, though," returned the young fellow mischievously, "and you told Stacy, there, that we'd better learn something of the world before we tried to buy it or even hire it, and that it was just as well to get the hayseed out of our hair and the slumgullion off our boots before we mixed in polite society."

"Well, I don't see what's the matter with that sentiment now," returned the second speaker good-humoredly; "only," he added gravely, "we didn't quarrel—God forbid!"

There was something in the speaker's tone which seemed to touch a common chord in their natures, and this was voiced by Barker with sudden and almost pathetic earnestness....