The Three Golden Apples (From: "A Wonder-Book for Girls and Boys") 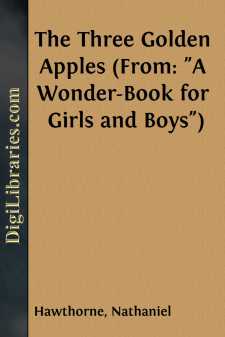 INTRODUCTORY TO "THE THREE GOLDEN APPLES"

The snow-storm lasted another day; but what became of it afterwards, I cannot possibly imagine. At any rate, it entirely cleared away, during the night; and when the sun arose, the next morning, it shone brightly down on as bleak a tract of hill-country, here in Berkshire, as could be seen anywhere in the world. The frost-work had so covered the windowpanes that it was hardly possible to get a glimpse at the scenery outside. But, while waiting for breakfast, the small populace of Tanglewood had scratched peepholes with their finger-nails, and saw with vast delight that—unless it were one or two bare patches on a precipitous hillside, or the gray effect of the snow, intermingled with the black pine forest—all nature was as white as a sheet. How exceedingly pleasant! And, to make it all the better, it was cold enough to nip one's nose short off! If people have but life enough in them to bear it, there is nothing that so raises the spirits, and makes the blood ripple and dance so nimbly, like a brook down the slope of a hill, as a bright, hard frost.

No sooner was breakfast over, than the whole party, well muffled in furs and woollens, floundered forth into the midst of the snow. Well, what a day of frosty sport was this! They slid down hill into the valley, a hundred times, nobody knows how far; and, to make it all the merrier, upsetting their sledges, and tumbling head over heels, quite as often as they came safely to the bottom. And, once, Eustace Bright took Periwinkle, Sweet Fern, and Squash-blossom, on the sledge with him, by way of insuring a safe passage; and down they went, full speed. But, behold, half-way down, the sledge hit against a hidden stump, and flung all four of its passengers into a heap; and, on gathering themselves up, there was no little Squash-blossom to be found! Why, what could have become of the child? And while they were wondering and staring about, up started Squash-blossom out of a snow-bank, with the reddest face you ever saw, and looking as if a large scarlet flower had suddenly sprouted up in midwinter. Then there was a great laugh.

When they had grown tired of sliding down hill, Eustace set the children to digging a cave in the biggest snow-drift that they could find. Unluckily, just as it was completed, and the party had squeezed themselves into the hollow, down came the roof upon their heads, and buried every soul of them alive! The next moment, up popped all their little heads out of the ruins, and the tall student's head in the midst of them, looking hoary and venerable with the snow-dust that had got amongst his brown curls. And then, to punish Cousin Eustace for advising them to dig such a tumble-down cavern, the children attacked him in a body, and so bepelted him with snowballs that he was fain to take to his heels.

So he ran away, and went into the woods, and thence to the margin of Shadow Brook, where he could hear the streamlet grumbling along, under great overhanging banks of snow and ice, which would scarcely let it see the light of day....