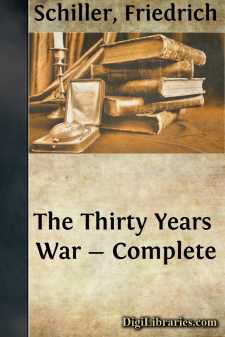 The present is the best collected edition of the important works of Schiller which is accessible to readers in the English language. Detached poems or dramas have been translated at various times since the first publication of the original works; and in several instances these versions have been incorporated into this collection. Schiller was not less efficiently qualified by nature for an historian than for a dramatist. He was formed to excel in all departments of literature, and the admirable lucidity of style and soundness and impartiality of judgment displayed in his historical writings will not easily be surpassed, and will always recommend them as popular expositions of the periods of which they treat.

Since the publication of the first English edition many corrections and improvements have been made, with a view to rendering it as acceptable as possible to English readers; and, notwithstanding the disadvantages of a translation, the publishers feel sure that Schiller will be heartily acceptable to English readers, and that the influence of his writings will continue to increase.

THE HISTORY OF THE REVOLT OF THE NETHERLANDS was translated by Lieut. E. B. Eastwick, and originally published abroad for students' use. But this translation was too strictly literal for general readers. It has been carefully revised, and some portions have been entirely rewritten by the Rev. A. J. W. Morrison, who also has so ably translated the HISTORY OF THE THIRTY YEARS WAR.

THE CAMP OF WALLENSTEIN was translated by Mr. James Churchill, and first appeared in "Frazer's Magazine." It is an exceedingly happy version of what has always been deemed the most untranslatable of Schiller's works.

THE PICCOLOMINI and DEATH OF WALLENSTEIN are the admirable version of S. T. Coleridge, completed by the addition of all those passages which he has omitted, and by a restoration of Schiller's own arrangement of the acts and scenes. It is said, in defence of the variations which exist between the German original and the version given by Coleridge, that he translated from a prompter's copy in manuscript, before the drama had been printed, and that Schiller himself subsequently altered it, by omitting some passages, adding others, and even engrafting several of Coleridge's adaptations.

WILHELM TELL is translated by Theodore Martin, Esq., whose well-known position as a writer, and whose special acquaintance with German literature make any recommendation superfluous.

DON CARLOS is translated by R. D. Boylan, Esq., and, in the opinion of competent judges, the version is eminently successful. Mr. Theodore Martin kindly gave some assistance, and, it is but justice to state, has enhanced the value of the work by his judicious suggestions.

The translation of MARY STUART is that by the late Joseph Mellish, who appears to have been on terms of intimate friendship with Schiller. His version was made from the prompter's copy, before the play was published, and, like Coleridge's Wallenstein, contains many passages not found in the printed edition. These are distinguished by brackets. On the other hand, Mr. Mellish omitted many passages which now form part of the printed drama, all of which are now added. The translation, as a whole, stands out from similar works of the time (1800) in almost as marked a degree as Coleridge's Wallenstein, and some passages exhibit powers of a high order; a few, however, especially in the earlier scenes, seemed capable of improvement, and these have been revised, but, in deference to the translator, with a sparing hand.

THE MAID OF ORLEANS is contributed by Miss Anna Swanwick, whose translation of Faust has since become well known. It has been. carefully revised, and is now, for the first time, published complete....