The Ten Books on Architecture 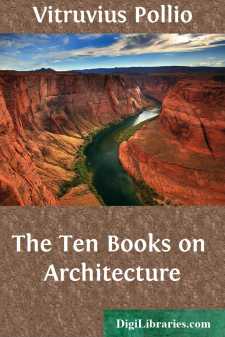 During the last years of his life, Professor Morgan had devoted much time and energy to the preparation of a translation of Vitruvius, which he proposed to supplement with a revised text, illustrations, and notes. He had completed the translation, with the exception of the last four chapters of the tenth book, and had discussed, with Professor Warren, the illustrations intended for the first six books of the work; the notes had not been arranged or completed, though many of them were outlined in the manuscript, or the intention to insert them indicated. The several books of the translation, so far as it was completed, had been read to a little group of friends, consisting of Professors Sheldon and Kittredge, and myself, and had received our criticism, which had, at times, been utilized in the revision of the work.

After the death of Professor Morgan, in spite of my obvious incompetency from a technical point of view, I undertook, at the request of his family, to complete the translation, and to see the book through the press. I must, therefore, assume entire responsibility for the translation of the tenth book, beginning with chapter thirteen, and further responsibility for necessary changes made by me in the earlier part of the translation, changes which, in no case, affect any theory held by Professor Morgan, but which involve mainly the adoption of simpler forms of statement, or the correction of obvious oversights.

The text followed is that of Valentine Rose in his second edition (Leipzig, 1899), and the variations from this text are, with a few exceptions which are indicated in the footnotes, in the nature of a return to the consensus of the manuscript readings.

The illustrations in the first six books are believed to be substantially in accord with the wishes of Professor Morgan. The suggestions for illustrations in the later books were incomplete, and did not indicate, in all cases, with sufficient definiteness to allow them to be executed, the changes from conventional plans and designs intended by the translator. It has, therefore, been decided to include in this part of the work only those illustrations which are known to have had the full approval of Professor Morgan. The one exception to this principle is the reproduction of a rough model of the Ram of Hegetor, constructed by me on the basis of the measurements given by Vitruvius and Athenaeus.

It does not seem to me necessary or even advisable to enter into a long discussion as to the date of Vitruvius, which has been assigned to various periods from the time of Augustus to the early centuries of our era. Professor Morgan, in several articles in the Harvard Studies in Classical Philology, and in the Proceedings of the American Academy, all of which have been reprinted in a volume of Addresses and Essays (New York, 1909), upheld the now generally accepted view that Vitruvius wrote in the time of Augustus, and furnished conclusive evidence that nothing in his language is inconsistent with this view....