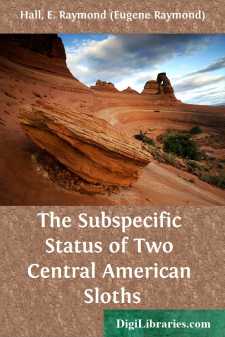 New name combinations for two kinds of Central American sloths that heretofore have stood in the literature as nominal species are given below, along with the evidence supporting their relegation to subspecific rank. Research assistance has been provided from a contract (NR 161-791) between the Office of Naval Research, Department of the Navy, and the University of Kansas.

The specimens from Real de Santa Maria, Tapalisa, and Cituro, average darker than all others, but this darkness is approached in certain specimens of griseus (for example, No. 139833, from Vijagual, San Carlos). The broader, more rounded and less acutely pointed squamosal arm of the zygoma supposedly characteristic of ignavus is matched in certain specimens of griseus (for example, in No. 2824 from Juan Viñas, Costa Rica) and the character is variable among specimens referred to ignavus; the shape of the squamosal arm is of doubtful taxonomic worth in the present connection. The depth of the grooving on the palate seems to vary with age and is of questionable value taxonomically. The emarginate nasals of ignavus are matched in griseus (No. 139833) from Vijagual, San Carlos, Costa Rica. The extension of the anterior symphyseal region of the mandible is short in ignavus; the specimen with the longest extension (No. 37621 from El Real), however, has the extension only barely shorter than does No. 139933 of griseus from Vijagual, San Carlos, Costa Rica. In brief, while we see the characters of ignavus as set forth by Goldman (op. cit.), we find them to be of only an average sort and not pronounced. Further, a specimen (No. 139833) from Vijagual, San Carlos, Costa Rica, provides a morphological intergrade between griseus and ignavus. Accordingly, we arrange ignavus as a subspecies of griseus; the name of the animal from extreme eastern Panamá should stand as Bradypus griseus ignavus Goldman, 1913....