The Strange Cases of Dr. Stanchon 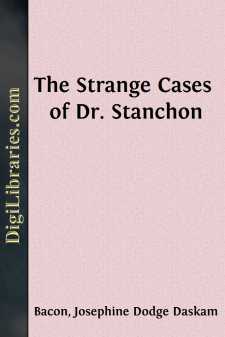 The young doctor stamped vehemently up the marble steps, to warm his feet, and once in the warm, flower-scented halls, let a little shiver escape him. The butler was new—he was always new, the doctor thought—and actually didn't know him.

"Mrs. Allen is at bridge, sir, with a party: she asks to be excused," he began mechanically.

("That's good!" Stanchon felt tempted to say, "and I hope the girls are out, too!") As if in answer to this indiscretion, the new butler droned on:

("Now, what particular infernal idiocy is Suzanne at, I wonder?" Stanchon pondered, still smiling lightly at the butler and warming himself at every breath.)

"Mr. Edmund is—I think he could be found, sir," the voice went on.

("I don't doubt it," Stanchon agreed mentally, "at the side board, no doubt; a nice time of day for a lad of twenty to be hanging about the house!")

But all he said was:

"I am the doctor. I called to see Miss Mary."

"Oh!" Even this new butler assumed a look of burdened intelligence; he leaned toward the visitor, "Oh, yes, sir—Miss Mary. I understood that it wouldn't be possible for Miss Mary to see anybody, sir, but I suppose, the doctor——"

"Certainly," said Stanchon curtly. "Please send word to her nurse that I am here."

("So they've sent for Jarvyse—well, I might have known. Nice, tactful crowd, aren't they!")

He scowled slightly and set his jaw.

"No, I'm Dr. Stanchon," he said. "Dr. Jarvyse is coming later, I suppose. Kindly let Miss Jessop know that I am here, will you? I haven't much time."

The man sped swiftly down the hall, after depositing his hatless charge in a blue satin reception-room, and Stanchon stared, unseeing, at the old Chinese panels and ivory figures that dotted its walls and tables. The strong odour of freesias and paper-narcissus hung heavy in the room; the roar of the great, dirty, cold city was utterly shut away and a scented silence, costly and blue and drowsy, held everything.

Presently the nurse stood before him, smiling, and he saw that her usual modish house dress was changed for the regulation white duck and peaked cap of her profession.

"What's all this?" he asked, and she shrugged her broad shoulders.

"She told me to put it on to-day. 'You're really a nurse, you know, Miss Jessop,' she said, 'and if I require one, it might as well be known.' Of course, I had it here, so I got it right out. Poor Miss Mary!"

"I see they've sent for Jarvyse?"

"Then it's all over but the shouting, I suppose?" Again she shrugged. The fatalism of her training spoke in that shrug, and the necessity for taking everything as it comes—since everything is bound to come!

"H'm..." he meditated deeply, and all the youth went out of his face, suddenly: he might have been forty-five or fifty....