The Story of Grenfell of the Labrador A Boy's Life of Wilfred T. Grenfell 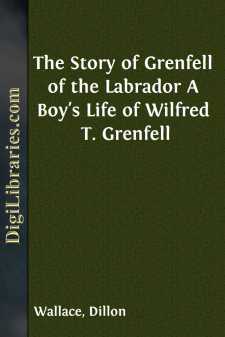 I THE SANDS OF DEE

The first great adventure in the life of our hero occurred on the twenty-eighth day of February in the year 1865. He was born that day. The greatest adventure as well as the greatest event that ever comes into anybody's life is the adventure of being born.

If there is such a thing as luck, Wilfred Thomason Grenfell, as his parents named him, fell into luck, when he was born on February twenty-eighth, 1865. He might have been born on February twenty-ninth one year earlier, and that would have been little short of a catastrophe, for in that case his birthdays would have been separated by intervals of four years, and every boy knows what a hardship it would be to wait four years for a birthday, when every one else is having one every year. There are people, to be sure, who would like their birthdays to be four years apart, but they are not boys.

Grenfell was also lucky, or, let us say, fortunate in the place where he was born and spent his early boyhood. His father was Head Master of Mostyn House, a school for boys at Parkgate, England, a little fishing village not far from the historic old city of Chester. By referring to your map you will find Chester a dozen miles or so to the southward of Liverpool, though you may not find Parkgate, for it is so small a village that the map makers are quite likely to overlook it.

Here at Parkgate the River Dee flows down into an estuary that opens out into the Irish Sea, and here spread the famous "Sands of Dee," known the world over through Charles Kingsley's pathetic poem, which we have all read, and over which, I confess, I shed tears when a boy:

Charles Kingsley and the poem become nearer and dearer to us than ever with the knowledge that he was a cousin of Grenfell, and knew the Sands o' Dee, over which Grenfell tramped and hunted as a boy, for the sandy plain was close by his father's house.

There was a time when the estuary was a wide deep harbor, and really a part of Liverpool Bay, and great ships from all over the world came into it and sailed up to Chester, which in those days was a famous port. But as years passed the sands, loosened by floods and carried down by the river current, choked and blocked the harbor, and before Grenfell was born it had become so shallow that only fishing vessels and small craft could use it....