The Stories of the Three Burglars 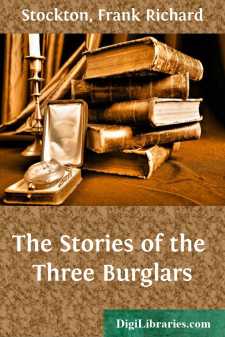 THE STORIES OF THE THREE BURGLARS

I am a householder in a pleasant country neighbourhood, about twenty miles from New York. My family consists of myself and wife, our boy, George William, aged two, two maid-servants, and a man; but in the summer we have frequent visitors, and at the time of which I am about to write my Aunt Martha was staying with us.

My house is large and pleasant, and we have neighbours near enough for social purposes and yet not too near or too many to detract from the rural aspect of our surroundings. But we do not live in a paradise; we are occasionally troubled by mosquitoes and burglars.

Against the first of these annoyances we have always been able to guard ourselves, at least in a measure, and our man and the cook declare that they have become so used to them that they do not mind them; but to guard against burglars is much more difficult, and to become used to them would, I think, require a great deal of practice.

For several months before the period of this narrative our neighbourhood had been subject to visits from burglars. From time to time houses had been entered and robbed, and the offenders had never been detected.

We had no police force, not even a village organization. There was a small railway station near our house, and six miles away was the county town. For fire and police protection each household was obliged to depend upon itself.

Before the beginning of the burglarious enterprises in our midst, we had not felt the need of much protection in this direction; sometimes poultry was stolen, but this was a rare occurrence, and, although windows and doors were generally fastened for the night, this labour was often considered much more troublesome than necessary. But now a great change had taken place in the feelings of our community. When the first robbery occurred the neighbours were inclined to laugh about it, and to say that Captain Hubbard's habit of sitting up after the rest of his family had gone to bed and then retiring and forgetting to close the front door had invited the entrance of a passing tramp. But when a second and a third house, where windows and doors had not been left open, had been entered, and, in a measure, despoiled, people ceased to laugh; and if there had been any merriment at all on the subject, it would have been caused by the extraordinary and remarkable precautions taken against the entrance of thieves by night. The loaded pistol became the favourite companion of the head of the house; those who had no watch-dogs bought them; there were new locks, new bolts, new fastenings. At one time there was a mounted patrol of young men, which, however, was soon broken up by their mothers. But this trouble was unavailing, for at intervals the burglaries continued.

As a matter of course a great many theories were broached as to the reasons for this disturbance in our hitherto peaceful neighbourhood. We were at such a distance from the ordinary centres of crime that it was generally considered that professional burglars would hardly take the trouble to get to us or to get away from us, and that, therefore, the offences were probably committed by unsuspected persons living in this part of the country who had easy means of determining which houses were worth breaking into and what method of entrance would be most feasible....