The Stepmother, A Drama in Five Acts 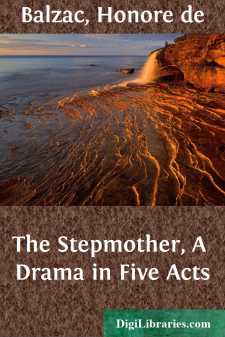 (A richly decorated drawing-room; on the walls are portraits of Napoleon I. and his son. The entry is by a large double glass door, which opens on a roofed veranda and leads by a short stairway to a park. The door of Pauline's apartments are on the right; those of the General and his wife are on the left. On the left side of the central doorway is a table, and on the right is a cabinet. A vase full of flowers stands by the entrance to Pauline's room. A richly carved marble mantel, with a bronze clock and candelabras, faces these apartments. In the front of the stage are two sofas, one on the left, the other on the right. Gertrude enters, carrying the flowers which she has just plucked, and puts them in the vase.)

Gertrude and the General.

Gertrude I assure you, my dear, that it would be unwise to defer any longer giving your daughter in marriage. She is now twenty-two. Pauline has been very slow in making her choice; and, in such a case, it is the duty of parents to see that their children are settled. Moreover, I am very much interested in her.

Gertrude The position of stepmother is always open to suspicion; and for some time it has been rumored in Louviers that I am the person who throws obstacles in the way of Pauline's marriage.

The General That is merely the idle gossip of little towns. I should like to cut out some of those silly tongues. And to think that they should attack you of all people, Gertrude, who have been a real mother to Pauline—whom you have educated most excellently!

Gertrude It is the way of the world! They will never forgive us for living so close to the town, yet never entering it. The society of the place revenges itself upon us for slighting it. Do you think that our happiness can escape envy? Even our doctor—

The GeneralDo you mean Vernon?

Gertrude Yes, Vernon is very envious of you; he is vexed to think that he has never been able to inspire any woman with such affection as I have for you. Moreover, he pretends that I am merely playing a part,—as if I could do it for twelve years! Rather unlikely, I should think.

The General No woman could keep up the pretence for twelve years without being found out. The idea is absurd! And Vernon also is—

Gertrude Oh, he is only joking! And so, as I told you before, you had better see Godard. I am astonished that he has not yet arrived. He is so rich that it would be folly to refuse him. He is in love with Pauline, and although he has his faults, and is somewhat provincial, he is quite able to make her happy.

The GeneralI have left Pauline quite free to choose a husband for herself.

Gertrude There is no cause for anxiety. A girl so gentle, so well brought up, so well behaved, is sure to do right.

The GeneralGentle, did you say? She is headstrong, like her father.

GertrudeShe, headstrong? And you, come now, do you not always act as I wish?

The General You are no angel, and always wish what pleases me! By the bye, Vernon takes dinner with us after his autopsy....