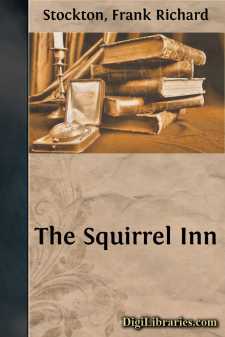 The steamboat Manasquan was advertised to leave her pier on the east side of the city at half-past nine on a July morning. At nine o'clock Walter Lodloe was on the forward upper deck, watching the early passengers come on board, and occasionally smiling as his glance fell upon a tall man in a blue flannel shirt, who, with a number of other deck-hands, was hard at work transferring from the pier to the steamer the boxes, barrels, and bales of merchandise the discouraging mass of which was on the point of being increased by the unloading of a newly arrived two-horse truck.

Lodloe had good reason to allow himself his smiles of satisfaction, for he had just achieved a victory over the man in the blue shirt, and a victory over a busy deck-hand on a hot day is rare enough to be valuable. As soon as he had stepped on board, he had deposited his hand-baggage in a place of safety, and walked forward to see the men run on the freight. It was a lively scene, and being a student of incident, character, and all that sort of thing, it greatly interested him. Standing by a strangely marked cask which had excited his curiosity, he found himself in the way of the deck-hand in the blue shirt, who, with red face and sparkling forehead, had just wheeled two heavy boxes up the incline of the gang-plank, and was about to roll them with easy rapidity to the other side of the deck; but Lodloe, with his back turned and directly in front of him, made it necessary for him to make a violent swerve to the right or to break the legs of a passenger. He made the swerve, missed Lodloe, and then, dumping his load, turned and swore at the young man with the promptness and accuracy of a cow-boy's revolver.

It was quite natural that a high-spirited young fellow should object to be sworn at, no matter what provocation he had given, and Lodloe not only objected but grew very angry. The thing which instantly suggested itself to him, and which to most people would seem the proper thing to do, was to knock down the man. But this knocking-down business is a matter which should be approached with great caution. Walter was a strong young fellow and had had some practice in boxing, but it was not impossible that, even with the backing of justifiable indignation, the conventional blow straight from the shoulder might have failed to fell the tall deck-hand.

But even had Lodloe succeeded in stretching the insulting man upon the dirty deck, it is not at all probable that he would have staid there. In five seconds there would have been a great fight, and it would not have been long before the young gentleman would have found himself in the custody of a policeman.

Lodloe's common sense was capable of considerable tension without giving way, even under a strain like this, and, although pale with anger, he would not engage in a personal contest with a deck-hand on a crowded steamboat; but to bear the insult was almost impossible. Never before had he been subjected to such violent abuse.

But in a flash he remembered something, and the man had scarcely turned his empty truck to go back to the pier, when Lodloe stepped in front of him, and with a wave of the hand stopped him....