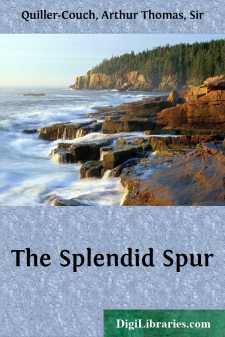 A year or two ago it was observed that three writers were using the curiously popular signature "Q." This was hardly less confusing than that one writer should use three signatures (Grant Allen, Arbuthnot Wilson, and Anon), but as none of the three was willing to try another letter, they had to leave it to the public (whose decision in such matters is final) to say who is Q to it. The public said, Let him wear this proud letter who can win it, and for the present at least it is in the possession of the author of "The Splendid Spur" and "The Blue Pavilions." It would seem, too, as if it were his "to keep," for "Q" is like the competition cups that are only yours for a season, unless you manage to carry them three times in succession. Mr. Quiller-Couch has been champion Q since 1890.

The interesting question is not so much, What has he done to be the only prominent Q of these years, as Is he to be the Q of all time? If so, he will do better work than he has yet done, though several of his latest sketches—and one in particular—are of very uncommon merit. Mr. Quiller-Couch is so unlike Mr. Kipling that one immediately wants to compare them. They are both young, and they have both shown such promise that it will be almost sad if neither can write a book to live—as, of course, neither has done as yet. Mr. Kipling is the more audacious, which is probably a matter of training. He was brought up in India, where one's beard grows much quicker than at Oxford, and where you not only become a man (and a cynic) in a hurry, but see and hear strange things (and print them) such as the youth of Oxford miss, or, becoming acquainted with, would not dare insert in the local magazine of the moment. So Mr. Kipling's first work betokened a knowledge of the world that is by no means to be found in "Dead Man's Rock," the first book published by Mr. Quiller-Couch. On the other hand, it cannot truly be said that Mr. Kipling's latest work is stronger than his first, while the other writer's growth is the most remarkable thing about him. It is precisely the same Mr. Kipling who is now in the magazines that was writing some years ago in India (and a rare good Mr. Kipling too), but the Mr. Quiller-Couch of to-day is the Quiller-Couch of "Dead Man's Rock" grown out of recognition. To compare their styles is really to compare the men. Mr. Kipling's is the more startling, the stronger (as yet), and the more mannered. Mark Twain, it appears, said he reads Mr. Kipling for his style, which is really the same thing as saying you read him for his books, though the American seems only to have meant that he eats the beef because he likes the salt. It is a journalistic style, aiming too constantly at sharp effects, always succeeding in getting them. Sometimes this is contrived at the expense of grammar, as when (a common trick with the author) he ends a story with such a paragraph as "Which is manifestly unfair." Mr. Quiller-Couch has never sinned in this way, but his first style was somewhat turgid, even melodramatic, and, compared with Mr....