The Spirit of Sweetwater 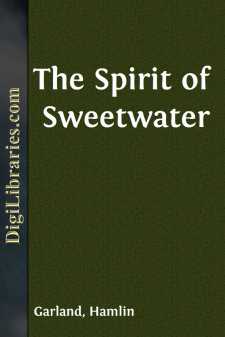 The Spirit of Sweetwater CHAPTER I

One spring day a young man of good mental furnishing and very slender purse walked over the shoulder of Mount Mogallon and down the trail to Gold Creek. He walked because the stage fare seemed too high.

Two years and four months later he was pointed out to strangers by the people of Sweetwater Springs. "That is Richard Clement, the sole owner of 'The Witch,' a mine valued at three millions of dollars." This in itself was truly an epic.

Sweetwater Springs was a village in a cañon, out of which rose two wonderful springs of water whose virtues were known throughout the land. The village was wedged in the cañon which ran to the mighty breast of Mogallon like a fold in a king's robe.

The village and its life centered around the pavilion which roofed the spring, and Clement spent his evenings there in order to see the people, at least, as they joyously thronged about the music-stand and sipped the beautiful water which the Utes long, long ago called "sweet water," and visited with reverence and hope of returning health.

Since the coming of his great wealth Clement had not allowed himself a day's vacation, and he had grown ten years older in that time. There were untimely signs of age in his hair and in the troubled lines of his face. He was a young man, but he looked a strong and stern and careworn man to those whose attention was called to him. He was a conscientious man, and the possession of great wealth was not without its gravities.

For the first time he felt it safe to leave his mine in other hands. He had a longing to mix with his kind once more, and in his heart was the secret hope that somewhere among the women of the Springs he might find a girl to take to wife. He arranged his vacation for July, not because it was ever hot at the Creek, but because he knew the Springs swarmed at that time with girls from the States. It would have troubled him had any one put these ideas into words and accused him of really seeking a bride.

He was a self-unconscious man naturally, and he hardly realized yet how widely his name had gone as the possessor of millions. He supposed himself an unnoticed atom as he stood at the spring on the second night of his stay in the village. Of a certainty many did not know him, but they saw him, for he was a striking figure—a handsome figure—though that had never concerned him. He was, in fact, feeling his own insignificance.

He was standing there in shadow looking out somberly upon the streams of people as they came to take their evening draught at the wonderful water of the effervescing spring. The sun had gone behind the high peaks to the west, and a delicious, dry coolness was in the cañon.

It seemed to Clement to be a very fashionable and leisurely throng—so long had he been absent from people either modish or easeful. He felt himself to be hopelessly outside all this youth and brilliancy and merriment, and he looked upon it all with a certain wistfulness.

He perceived at length that the strollers were not all of the same conditions. There were rough, brown cow-boys from La Junta and Cajon, and miners in rough dress down from the gulches for a night, but mainly the promenaders appealed to him with elegance of dress and manner.

Many of the ladies came without hats, which added to the charm of their eyes and hair. Some of them looked twice at the tall man with the big mustache and broad hat, who seemed to be watching for some tardy friend.

As he studied them his memory freshened and he came to understand them better. He analyzed them into familiar types....