The Skilful Cook A Practical Manual of Modern Experience 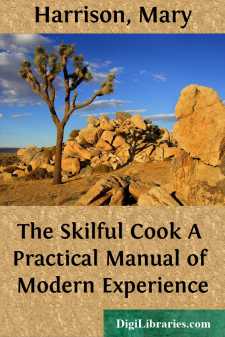 The importance of every woman having a thorough knowledge of domestic economy cannot be too strongly insisted on. The false refinement which, of late years, has considered an acquaintance with domestic matters to be only suitable for servants, has been fraught with the most disastrous consequences. This may seem strong language, but it is not too strong. All sanitary reformers know well enough that it is in the power of many women to prevent very many deaths, and an incalculable amount of misery and vice. Speaking of sanitary reform, the late Canon Kingsley says:—‘Women can do in that work what men cannot. The private correspondence of women, private conversation, private example of ladies, above all of married women, of mothers of families, may do what no legislation can.’ And again, in the same speech, delivered on behalf of the Ladies' Sanitary Association, he says:—‘Ah! would to God that some man had the pictorial eloquence to put before the mothers of England the mass of preventable agony of mind and body which exists in England, year after year: and would that some man had the logical eloquence to make them understand that it is in their power, in the power of the mothers and wives of the higher classes—I will not say to stop it all, God only knows that—but to stop, as I believe, three-fourths of it.’

This may seem to some, perhaps, too serious an introduction to a cookery book; but it is my earnest wish that my book may not be simply a collection of recipes for cooks to refer to, but a real help to those women who, recognising the importance of good cookery in sanitary reform, are doing their utmost (as I know many are) to acquire that knowledge, and are thereby making the lives of those about them brighter and happier; and are also by their examples doing an amount of good that they themselves scarcely dream of. I have been told more than once by those benevolently interested in the working classes that with instruction to ladies on cookery they had no sympathy, and they seemed to think that it would be better if lessons on the subject were given exclusively to the poor. They forget that the wives of the working men are women who have most of them been domestic servants, and that what they learn in their situations, and what habits they there acquire, they take for good or evil into their own homes; and in this way an ignorant careless mistress may be doing an infinitude of harm to her sister women in a lower position than herself. On the other hand, a mistress who understands thoroughly the management of a house, by wisely training her servants in habits of order and industry, by teaching them what they do not know and have had no opportunity of learning about hygiene or the laws of health, may be—in fact cannot help being—a blessing indirectly to many homes.

I believe that the working classes must be taught in this way if they are to be taught at all. I have myself, over and over again, tried to benefit my poorer sisters by giving them free lessons on food and cookery; and although I invariably find a few who are very grateful for such instruction, the majority, I imagine, never trouble to put in practice what they have been taught....