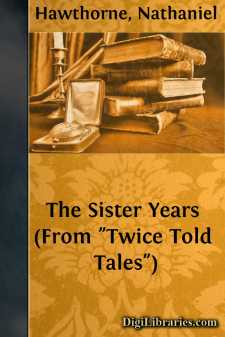 Last night, between eleven and twelve o'clock, when the Old Year was leaving her final foot prints on the borders of Time's empire, she found herself in possession of a few spare moments, and sat down—of all places in the world—on the steps of our new City Hall. The wintry moonlight showed that she looked weary of body, and sad of heart, like many another wayfarer of earth. Her garments, having been exposed to much foul weather, and rough usage, were in very ill condition; and as the hurry of her journey had never before allowed her to take an instant's rest, her shoes were so worn as to be scarcely worth the mending. But, after trudging only a little distance farther, this poor Old Year was destined to enjoy a long, long sleep. I forgot to mention, that when she seated herself on the steps, she deposited by her side a very capacious bandbox, in which, as is the custom among travellers of her sex, she carried a great deal of valuable property. Besides this luggage, there was a folio book under her arm, very much resembling the annual volume of a newspaper. Placing this volume across her knees, and resting her elbows upon it, with her forehead in her hands, the weary, bedraggled, world-worn Old Year heaved a heavy sigh, and appeared to be taking no very pleasant retrospect of her past existence.

While she thus awaited the midnight knell, that was to summon her to the innumerable sisterhood of departed Years, there came a young maiden treading lightsomely on tiptoe along the street, from the direction of the Railroad Depot. She was evidently a stranger, and perhaps had come to town by the evening train of cars. There was a smiling cheerfulness in this fair maiden's face, which bespoke her fully confident of a kind reception from the multitude of people, with whom she was soon to form acquaintance. Her dress was rather too airy for the season, and was bedizened with fluttering ribbons and other vanities, which were likely soon to be rent away by the fierce storms, or to fade in the hot sunshine, amid which she was to pursue her changeful course. But still she was a wonderfully pleasant looking figure, and had so much promise and such an indescribable hopefulness in her aspect, that hardly anybody could meet her without anticipating some very desirable thing—the consummation of some long-sought good—from her kind offices. A few dismal characters there may be, here and there about the world, who have so often been trifled with by young maidens as promising as she, that they have now ceased to pin any faith upon the skirts of the New Year. But, for my own part, I have great faith in her; and should I live to see fifty more such, still, from each of those successive sisters, I shall reckon upon receiving something that will be worth living for.

The New Year—for this young maiden was no less a personage—carried all her goods and chattels in a basket of no great size or weight, which hung upon her arm. She greeted the disconsolate Old Year with great affection, and sat down beside her on the steps of the City Hall, waiting for the signal to begin her rambles through the world. The two were own sisters, being both granddaughters of Time; and though one looked so much older than the other, it was rather owing to hardships and trouble than to age, since there was but a twelvemonth's difference between them.

"Well, my dear sister," said the New Year, after the first salutations, "you look almost tired to death. What have you been about during your sojourn in this part of Infinite Space?"

"O, I have it all recorded here in my Book of Chronicles," answered the Old Year, in a heavy tone. "There is nothing that would amuse you; and you will soon get sufficient knowledge of such matters from your own personal experience. It is but tiresome reading."

Nevertheless, she turned over the leaves of the folio, and glanced at them by the light of the moon, feeling an irresistible spell of interest in her own biography, although its incidents were remembered without pleasure. The volume, though she termed it her Book of Chronicles, seemed to be neither more nor less than the Salem Gazette for 1838; in the accuracy of which journal this sagacious Old Year had so much confidence, that she deemed it needless to record her history with her own pen.

"What have you been doing in the political way?" asked the New Year....