The Silver Cross or The Carpenter of Nazareth 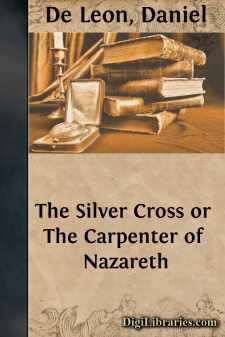 It was about the fifteenth year of the reign of the Emperor Tiberius that I, Genevieve, a slave of Aurelia, the wife of a Roman named Gremion and located in Marseilles, departed from Marseilles with my mistress and her husband for Judea.

The dominion of the Romans, at that period, extended from one end of the world to the other. Judea had submitted to them, as a dependence of the province of Syria, governed by a magistrate from Rome. Several vessels departed from Marseilles for the country of the Israelites. My master, Gremion, a relative of the Roman Procurator in Judea named Pontius Pilate, was chosen to replace in that country the treasury-tribune, appointed to collect the taxes; for wherever the Roman dominion established itself, the exaction of taxes was established at the same time.

One evening there was, at Jerusalem, a grand supper at Pontius Pilate's, Procurator in the country of the Israelites, for the Emperor Tiberius.

Towards the decline of the day, the most brilliant society of the city repaired to the house of the Roman seigneur. His mansion, like that of all the rich persons of the country, was built of hewn stone, plastered over with chalk, and painted a red color.

This sumptuous residence was entered by a square court, surrounded by marble columns, forming a gallery. In the middle of this court there was a fountain, which spread a delicious freshness beneath the scorching sun of Arabia. An immense palm tree, planted near the fountain, covered it with its shade during the heat of day. Next came a vestibule filled with servants, and thence followed the dining hall, wainscotted with sandal wood, inlaid with ivory.

Around the table were ranged beds of cedar-wood, hung with rich draperies, on which the guests seated themselves during the repast. In accordance with the custom of the country, the women who partook of the dinner had each brought one of their slaves, who stood behind them during the feast. It was thus that I, Genevieve, witnessed the scenes I am about to narrate, having accompanied my mistress, Aurelia, to the house of Pontius Pilate.

The society was select. Amongst the most distinguished guests were remarked the Seigneur Baruch, a senator and doctor of law; the Seigneur Chusa, steward of the household of Herod, tetrarch or prince of Judea, under the protection of Rome; the Seigneur Gremion, newly arrived from Roman Gaul, as clerk of the treasury in Judea; the Seigneur Jonas, one of the richest bankers in Jerusalem; and lastly, the Seigneur Caiphus, one of the princes of the Hebrew church.

Amongst the number of women who were present at the feast were Lucretia, the wife of Pontius Pilate; Aurelia, the wife of Gremion; and Jane, the wife of Chusa. The two prettiest women of the assembly, who on this night supped with Pontius Pilate, were Jane and Aurelia. Jane had that beauty peculiar to the orientals; large black eyes, soft and piercing, and teeth of a snowy whiteness, which her dark complexion rendered still more dazzling. Her turban, of rich Tyrian cloth, and of a purple color, encircled by a heavy gold chain, the two ends fell one on each shoulder, encased her countenance half concealed by large tresses of black hair. She was dressed in a long white robe, leaving bare her arms loaded with gold bracelets. Over this robe, confined round her waist by a scarf of purple cloth, similar to the turban, she wore a sort of spencer of orange silk, without sleeves. The handsome features of Jane had an expression full of gentleness, and her smile expressed an engaging sweetness.

Aurelia, Gremion's wife, born of Roman parents, in southern Gaul, was also beautiful, and wore, according to the fashion of her country, two tunics, one a long one and red, the other short and clear blue; a gold band confined her chestnut hair; her complexion was as fair as that of Jane was dark; her large blue eyes beamed with delight, and her cheerful smile announced an unalterable good humor.

The senator Baruch, one of the most learned doctors of the law, occupied at this supper the place of honor....