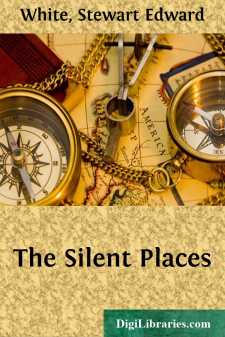 At about eight o'clock one evening of the early summer a group of men were seated on a grass-plot overlooking a broad river. The sun was just setting through the forest fringe directly behind them.

Of this group some reclined in the short grass, others lay flat on the bank's slope, while still others leaned against the carriages of two highly ornamented field-guns, whose embossed muzzles gaped silently at an eastern shore nearly two miles distant.

The men were busy with soft-voiced talk, punctuating their remarks with low laughter of a singularly infectious character. It was strange speech, richly embroidered with the musical names of places, with unfamiliar names of beasts, and with unintelligible names of things. Kenógami, Mamátawan, Wenebógan, KapúskasГѓ­ng, the silver-fox, the sea-otter, the sable, the wolverine, the musk-ox, parka, babiche, tump-line, giddés,—these and others sang like arrows cleaving the atmosphere of commoner words. In the distant woods the white-throats and olive thrushes called in a language hardly less intelligible.

There scarcely needed the row of glistening birch-barks below the men, the warehouse with its picketed lane, the tall flag-staff, the block-house stockade, the half-bred women chatting over the low fences of the log-houses, the squaws wandering to and fro in picturesque silence, the Indian children playing noisily or standing in awe before the veranda of the white house, to inform the initiated that this little forest- and river-girt settlement was a post of the Honourable the Hudson's Bay Company. The time of sunset and the direction of the river's flow would have indicated a high latitude. The mile-long meadow, with its Indian camp, the oval of forest, the immense breadth of the river identified the place as Conjuror's House. Thus the blue water in the distance was James Bay, the river was the Moose; enjoying his Manila cheroot on the Factory veranda with the other officers of the Company was Galen Albret, and these men lounging on the river bank were the Company's post-keepers and runners, the travellers of the Silent Places.

They were of every age and dressed in a variety of styles. All wore ornamented moccasins, bead garters, and red sashes of worsted. As to the rest, each followed his taste. So in the group could be seen bare heads, fillet-bound heads, covered heads; shirt sleeves, woollen jerseys, and long, beautiful blanket coats. Two things, however, proved them akin. They all possessed a lean, wiry hardness of muscle and frame, a hawk-like glance of the eye, an almost emaciated spareness of flesh on the cheeks. They all smoked pipes of strong plug tobacco.

Whether the bronze of their faces, thrown into relief by the evening glow, the frowning steadiness of their eyes, or more fancifully the background of the guns, the flag-staff and the stockade was most responsible, the militant impression persisted strongly. These were the veterans of an hundred battles. They were of the stuff forlorn hopes are fashioned from. A great enemy, a powerful enemy, an enemy to be respected and feared had hardened them to the unyielding. The adversary could almost be measured, the bitterness of the struggle almost be gauged from the scars of their spirits; the harshness of it, the cruelty of it, the wonderful immensity of it that should so fashion the souls and flesh of men....