The Shellback's Progress In the Nineteenth Century 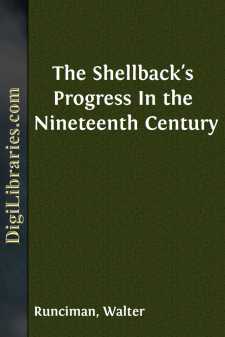 There was a large fleet of sailing brigs, barques and schooners waiting for a favourable wind and spring tides, so that they might be put to sea without running the risk of thumping their keels off on the Bar. The vessels had been loaded for several weeks. Many of them were bound to the Baltic. These were spoken of as the "Spring Fleet." The older and smaller craft were engaged in the coasting trade, and the larger were bound to ports in the southern hemisphere. Each of them carried three or four apprentices; but the southern-going portion did not deem the collier lads "classy" enough to permit of them forming close comradeship. A condescending speaking-acquaintance was the limit of their connection. There was nothing to justify this snobbery, for in point of comparison the average collier lad in seamanship and physical capacity was the equal, and in intelligence by no means inferior to the young gentlemen who regarded the class of vessel they served aboard of as a stamp of their own superiority. They were indeed a species of that terrible creature who apes nobility because he lives in a mansion. Occasionally the collier lads resented the lofty airs of the southern-going gentry, until open hostility ensued and much blood was spilt. But pugilistic encounters were conducted on strictly professional lines, and no ill-will was supposed to exist on the part of the combatants after they were over. That was the rule laid down, and a breach of it brought disgrace on the violator and his coadjutors, who were thereupon ostracised from the party to which they belonged. The necessity for enforcing the penalty rarely occurred, not only because of its severity, but because it involved loss of honour.

A disagreement as to valour and prowess and seamanship had arisen between some sailor lads who belonged to the two different sections. They decided that their differences could only be settled by being fought out on neutral ground. This was solemnly chosen, a ring formed, seconds appointed, and the contest began. In half-an-hour victory was decided in favour of the collier boy, though with all the fulness of sailor generosity his opponent received an ungrudging share of the ovation that was given to the champion. Both, however, showed evidences of rough usage: the only visible difference being that one had two eyes badly damaged while the victor had but one. After it was over they shook hands, swore allegiance to each other, walked back to their respective vessels, had raw beef applied to the eyes that were discoloured, tumbled into their hammocks and fell fast asleep. Meanwhile a general meeting of apprentice lads from all the vessels in port was mustered, so that the result of the dispute should be publicly proclaimed; and in order that the occasion should be suitably celebrated, it was suggested and approved by loud acclamation that whereas there was every chance of the morrow being a sailing day, when the little port would be emptied of all its shipping, it might be that the parting would represent years, and perchance many of them would never meet on earth again....