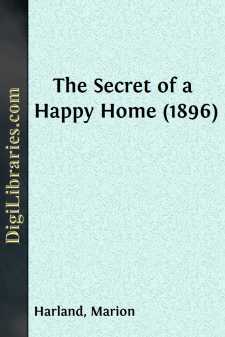 John is not John until he is married. He assumes the sobriquet at the altar as truly as his bride takes the title of "Mistress" or "Madame." Once taken, the name is generic, inalienable and untransferable. Yet, as few men marry until they have attained legal majority, it follows that your John—my John—every wife's John—must have been in making for a term of years before he fell into our hands.

Sometimes he is marred in the making.

The most loyal wife admits to her inmost self in the most confidential season of self-communion, that she could have brought up her husband better than his mother or whatever feminine relative had the training of him succeeded in doing. An opinion which, I remark, is not shared by the relative in question. The mother of a growing son will know how to sympathize with her Mamma-in-law, when her own son—

"—will a-wooing go,Whether his mother will or no."

I am John's advocate and best friend, but I cannot withhold the admission that he has some grave faults, and one or two incurable disabilities. Grappling, forthwith, with the most obstinate of these last—I name it boldly. John is not—he never can be—and would not be if he could—a woman. Taking into consideration the incontrovertible truth that nobody but a woman ever understood another woman—the situation is serious enough. So desperate in fact, that every mother's daughter of the missionary sex is fired with zealous desire to mend it, and chooses for a subject her own special John—in esse or in posse.

This may sound like badinage, but it is uttered in sad earnest. The wife's irrational longing to extract absolute sympathy of taste, opinion and feeling, from her wedded lord, is a baneful growth which is as sure to spring up about the domestic hearth as pursley—named by the Indian, "the white man's foot"—to show itself about the squatter's door. Once rooted it is as hard to eradicate as plantain and red sorrel.

I brand it as "irrational," because common sense shows the extreme improbability that two people—born of different stocks, and brought up in different households—the man, sometimes, in no household at all—should each be the exact counterpart of the other; should come together provided respectively, with the very qualities, likes and dislikes, that the partner needs and prefers.

Add to the improbability aforesaid the inevitable variance of views upon divers important subjects consequent upon the standpoint masculine and the standpoint feminine, and the wonder grows—not that some marriages are unhappy, but that a large percentage of wedded couples jog on comfortably, and, if not without jar, without open scandal. That they do speaks volumes for the wisdom of Him who ordained marriage as man's best estate—and something—not volumes—perhaps, but a pamphlet or two—in behalf of human powers of philosophical endurance.

Before going farther it would be well to look our subject in the face—inspect it fairly and without prejudice pro or con.

Stand forth, honest John! and let us behold you, as God made and your mother—in blood, or in heart—trained you. Let the imagination of my readers survey him, as he plants himself before us. Albeit a trifle more conscious than a woman would be in like circumstances, of the leading fact that he has the full complement of hands and feet usually prescribed by Nature, he bears scrutiny bravely. He is what he would denominate in another, "a white man;" square in his dealings with his fellow-men and with a soft place, on the sunny side of his heart, for the women. He would add—"God bless them!" did we allow him to speak. Men of his sort rarely think of their own womenkind or of pure, gentle womanhood in the abstract, without a benediction, mental or audible.

Our specimen, you will note, as he begins to feel at ease in the honorable pillory to which we have called him—puts his hands into his pockets. The gesture supplies us with the first clause of our illustrated lecture....