The Science of Human Nature A Psychology for Beginners 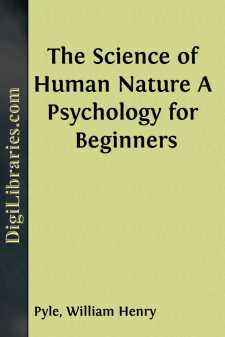 Science. Before attempting to define psychology, it will be helpful to make some inquiry into the nature of science in general. Science is knowledge; it is what we know. But mere knowledge is not science. For a bit of knowledge to become a part of science, its relation to other bits of knowledge must be found. In botany, for example, bits of knowledge about plants do not make a science of botany. To have a science of botany, we must not only know about leaves, roots, flowers, seeds, etc., but we must know the relations of these parts and of all the parts of a plant to one another. In other words, in science, we must not only know, we must not only have knowledge, but we must know the significance of the knowledge, must know its meaning. This is only another way of saying that we must have knowledge and know its relation to other knowledge.

A scientist is one who has learned to organize his knowledge. The main difference between a scientist and one who is not a scientist is that the scientist sees the significance of facts, while the non-scientific man sees facts as more or less unrelated things. As one comes to hunt for causes and inquire into the significance of things, one becomes a scientist. A thing or an event always points beyond itself to something else. This something else is what goes before it or comes after it,—is its cause or its effect. This causal relationship that exists between events enables a scientist to prophesy. By carefully determining what always precedes a certain event, a certain type of happening, a scientist is able to predict the event. All that is necessary to be able to predict an event is to have a clear knowledge of its true causes. Whenever, beyond any doubt, these causes are found to be present, the scientist knows the event will follow. Of course, all that he really knows is that such results have always followed similar causes in the past. But he has come to have faith in the uniformity and regularity of nature. The chemist does not find sulphur, or oxygen, or any other element acting one way one day under a certain set of conditions, and acting another way the next day under exactly the same conditions. Nor does the physicist find the laws of mechanics holding good one day and not the next.

The scientist, therefore, in his thinking brings order out of chaos in the world. If we do not know the causes and relations of things and events, the world seems a very mixed-up, chaotic place, where anything and everything is happening. But as we come to know causes and relations, the world turns out to be a very orderly and systematic place. It is a lawful world; it is not a world of chance. Everything is related to everything else.

Now, the non-scientific mind sees things as more or less unrelated. The far-reaching causal relations are only imperfectly seen by it, while the scientific mind not only sees things, but inquires into their causes and effects or consequences. The non-scientific man, walking over the top of a mountain and noticing a stone there, is likely to see in it only a stone and think nothing of how it came to be there; but the scientific man sees quite an interesting bit of history in the stone. He reads in the stone that millions of years ago the place where the rock now lies was under the sea. Many marine animals left their remains in the mud underneath the sea. The mud was afterward converted into rock. Later, the shrinking and warping earth-crust lifted the rock far above the level of the sea, and it may now be found at the top of the mountain. The one bit of rock tells its story to one who inquires into its causes. The scientific man, then, sees more significance, more meaning, in things and events than does the non-scientific man.

Each science has its own particular field. Zoölogy undertakes to answer every reasonable question about animals; botany, about plants; physics, about motion and forces; chemistry, about the composition of matter; astronomy, about the heavenly bodies, etc. The world has many aspects. Each science undertakes to describe and explain some particular aspect....