The School for Husbands 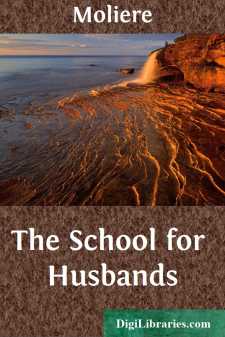 SGAN. Pray, brother, let us talk less, and let each of us live as he likes. Though you have the advantage of me in years, and are old enough to be wise, yet I tell you that I mean to receive none of your reproofs; that my fancy is the only counsellor I shall follow, and that I am quite satisfied with my way of living.

AR. But every one condemns it.

AR. Thank you very much. It is a pleasant compliment.

SGAN. I should like to know, since one ought to hear everything, what these fine critics blame in me.

AR. That surly and austere temper which shuns all the charms of society, gives a whimsical appearance to all your actions, and makes everything peculiar in you, even your dress.

SGAN. I ought then to make myself a slave in fashion, and not to put on clothes for my own sake? Would you not, my dear elder brother—for, Heaven be thanked, so you are, to tell you plainly, by a matter of twenty years; and that is not worth the trouble of mentioning—would you not, I say, by your precious nonsense, persuade me to adopt the fashions of those young sparks of yours?

[Footnote: The original has vos jeunes muguets, literally "your young lilies of the valley," because in former times, according to some annotators, the courtiers wore natural or artificial lilies of the valley in their buttonholes, and perfumed themselves with the essence of that flower. I think that muguet is connected with the old French word musguet, smelling of musk. In Molière's time muguet had become rather antiquated; hence it was rightly placed in the mouth of Sganarelle, who likes to use such words and phrases. Rabelais employs it in the eighth chapter of Gargantua, un tas de muguets, and it has been translated by Sir Thomas Urquhart as "some fond wooers and wench-courters." The fashion of calling dandies after the name of perfumes is not rare in France. Thus Regnier speaks of them as marjolets, from marjolaine, sweet marjoram; and Agrippa d'Aubigné calls them muscadins (a word also connected with the old French musguet), which name was renewed at the beginning of the first French revolution, and bestowed on elegants, because they always smelled of musk.]

Oblige me to wear those little hats which provide ventilation for their weak brains, and that flaxen hair, the vast curls whereof conceal the form of the human face;

[Footnote: The fashion was in Molière's time to wear the hair, or wigs, very long, and if possible of a fair colour, which gave to the young fashionables, hence called blondins, an effeminate air. Sganarelle addresses Valère (Act ii. Scene 9), likewise as Monsieur aux blonds cheveux. In The School for Wives (Act ii. Scene 6), Arnolphe also tells Agnès not to listen to the nonsense of these beaux blondins. According to Juvenal (Satire VI.) Messalina put a fair wig on to disguise herself. Louis XIV. did not begin to wear a wig until 1673.]

those little doublets but just below the arms, and those big collars falling down to the navel; those sleeves which one sees at table trying all the sauces, and those petticoats called breeches; those tiny shoes, covered with ribbons, which make you look like feather-legged pigeons; and those large rolls wherein the legs are put every morning, as it were into the stocks, and in which we see these gallants straddle about with their legs as wide apart, as if they were the beams of a mill...?