The Sayings Of Confucius 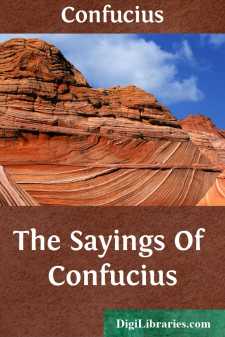 Confucius was born in the year 550 b.c., in the land of Lu, in a small village, situated in the western part of the modern province of Shantung. His name was K'ung Ch'iu, and his style (corresponding to our Christian name) was Chung-ni. His countrymen speak of him as K'ung Fu-tzu, the Master, or philosopher K'ung. This expression was altered into Confucius by the Jesuit missionaries who first carried his fame to Europe.

Since the golden days of the Emperors Yao and Shun, the legendary founders of the Chinese Empire, nearly two thousand years had passed. Shun chose as his successor Yü, who had been his chief minister, a man whose devotion to duty was such that when engaged in draining the empire of the great flood—a task that took eight years to accomplish—he never entered his home till the work was done, although in the course of his labours he had thrice to pass his door. He founded the Hsia dynasty, which lasted till 1766 b.c. The last emperor of this line, a vile tyrant, was overthrown by T'ang, who became the first ruler of the house of Shang, or Yin. This dynasty again degenerated in course of time and came to an end in Chou, or Chou Hsin (1154-22 b.c.), a monster of lust, extravagance, and cruelty. The empire was only held together by the strength and wisdom of the Duke of Chou, or King Wen, to give him his popular title, one of the greatest men in Chinese history. He controlled two-thirds of the empire; but, believing that the people were not yet ready for a change, he refrained from dethroning the emperor. In his day 'the husbandman paid one in nine; the pay of the officers was hereditary; men were questioned at barriers and at markets, but there were no tolls; fishgarths were not preserved; the children of criminals were sackless. The old and wifeless—the widower; the old and husbandless—the widow; the old and childless—the lone one; the young and fatherless—the orphan; these four are the people most in need below heaven, and they have no one to whom to cry, so when King Wen reigned his love went out first to them' (Mencius, Book II, chapter 5). After his death, his son, King Wu, decided that the nation was ripe for change. He overcame Chou Hsin by force of arms, and, placing himself on the throne, became the founder of the Chou dynasty.

In the time of Confucius the Chou dynasty still filled the throne. But it had long since become effete, and all power had passed into the hands of the great vassals. The condition of China was much like that of Germany in the worst days of the Holy Roman Empire. The emperor was powerless, the various vassal states were independent in all but name, and often at war one with the other. These states again were disintegrated, and their rulers impotent against encroaching feudatories. In Confucius' native state, Lu, the duke was a mere shadow. The younger branches of his house had usurped all power. Three in number, they were called the Three Clans. The most important of the three was the Chi, or Chi-sun clan, whose chiefs Chi Huan and Chi K'ang are often mentioned by Confucius....