The Rudder Grangers Abroad and Other Stories 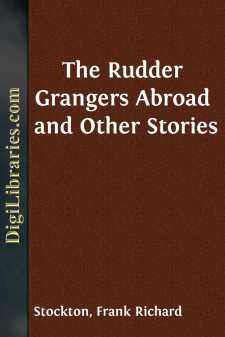 EUPHEMIA AMONG THE PELICANS.

The sun shone warm and soft, as it shines in winter time in the semi-tropics. The wind blew strong, as it blows whenever and wherever it listeth. Seven pelicans labored slowly through the air. A flock of ducks rose from the surface of the river. A school of mullet, disturbed by a shark, or some other unscrupulous pursuer, sprang suddenly out of the water just before us, and fell into it again like the splashing of a sudden shower.

I lay upon the roof of the cabin of a little yacht. Euphemia stood below, her feet upon the mess-chest, and her elbows resting on the edge of the cabin roof. A sudden squall would have unshipped her; still, if one would be happy, there are risks that must be assumed. At the open entrance of the cabin, busily writing on a hanging-shelf that served as a table, sat a Paying Teller. On the high box which during most of the day covered our stove was a little lady, writing in a note-book. On the forward deck, at the foot of the mast, sat a young man in a state of placidness. His feet stuck out on the bowsprit, while his mildly contemplative eyes went forth unto the roundabout.

At the tiller stood our guide and boatman, his sombre eye steady on the south-by-east. Around the horizon of his countenance there spread a dark and six-days' beard, like a slowly rising thunder-cloud; ever and anon there was a gleam of white teeth, like a bright break in the sky, but it meant nothing. During all our trip, the sun never shone in that face. It never stormed, but it was always cloudy. But he was the best boatman on those waters, and when he stood at the helm we knew we sailed secure. We wanted a man familiar with storms and squalls, and if this familiarity had developed into facial sympathy, it mattered not. We could attend to our own sunshine. At his feet sat humbly his boy of twelve, whom we called "the crew." He was making fancy knots in a bit of rope. This and the occupation of growing up were the only labors in which he willingly engaged.

Euphemia and I had left Rudder Grange, to spend a month or two in Florida, and we were now on a little sloop-yacht on the bright waters of the Indian River. It must not be supposed that, because we had a Paying Teller with us, we had set up a floating bank. With this Paying Teller, from a distant State, we had made acquaintance on our first entrance into Florida. He was travelling in what Euphemia called "a group," which consisted of his wife,—the little lady with the note-book,—the contemplative young man on the forward deck, and himself.

This Paying Teller had worked so hard and so rapidly at his business for several years, and had paid out so much of his health and strength, that it was necessary for him to receive large deposits of these essentials before he could go to work again. But the peculiar habits of his profession never left him. He was continually paying out something. If you presented a conversational check to him in the way of a remark, he would, figuratively speaking, immediately jump to his little window and proceed to cash it, sometimes astonishing you by the amount of small change he would spread out before you....