The Room in the Dragon Volant 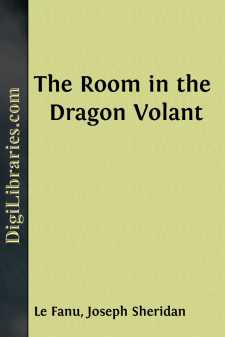 Chapter I ON THE ROAD

In the eventful year, 1815, I was exactly three-and-twenty, and had just succeeded to a very large sum in consols and other securities. The first fall of Napoleon had thrown the continent open to English excursionists, anxious, let us suppose, to improve their minds by foreign travel; and I—the slight check of the "hundred days" removed, by the genius of Wellington, on the field of Waterloo—was now added to the philosophic throng.

I was posting up to Paris from Brussels, following, I presume, the route that the allied army had pursued but a few weeks before—more carriages than you could believe were pursuing the same line. You could not look back or forward, without seeing into far perspective the clouds of dust which marked the line of the long series of vehicles. We were perpetually passing relays of return-horses, on their way, jaded and dusty, to the inns from which they had been taken. They were arduous times for those patient public servants. The whole world seemed posting up to Paris.

I ought to have noted it more particularly, but my head was so full of Paris and the future that I passed the intervening scenery with little patience and less attention; I think, however, that it was about four miles to the frontier side of a rather picturesque little town, the name of which, as of many more important places through which I posted in my hurried journey, I forget, and about two hours before sunset, that we came up with a carriage in distress.

It was not quite an upset. But the two leaders were lying flat. The booted postilions had got down, and two servants who seemed very much at sea in such matters, were by way of assisting them. A pretty little bonnet and head were popped out of the window of the carriage in distress. Its tournure, and that of the shoulders that also appeared for a moment, was captivating: I resolved to play the part of a good Samaritan; stopped my chaise, jumped out, and with my servant lent a very willing hand in the emergency. Alas! the lady with the pretty bonnet wore a very thick black veil. I could see nothing but the pattern of the Brussels lace as she drew back.

A lean old gentleman, almost at the same time, stuck his head out of the window. An invalid he seemed, for although the day was hot he wore a black muffler which came up to his ears and nose, quite covering the lower part of his face, an arrangement which he disturbed by pulling it down for a moment, and poured forth a torrent of French thanks, as he uncovered his black wig, and gesticulated with grateful animation.

One of my very few accomplishments, besides boxing, which was cultivated by all Englishmen at that time, was French; and I replied, I hope and believe grammatically. Many bows being exchanged, the old gentleman's head went in again, and the demure, pretty little bonnet once more appeared.

The lady must have heard me speak to my servant, for she framed her little speech in such pretty, broken English, and in a voice so sweet, that I more than ever cursed the black veil that baulked my romantic curiosity....