The Rise and Progress of Palaeontology 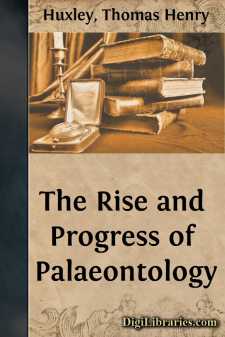 That application of the sciences of biology and geology, which is commonly known as palaeontology, took its origin in the mind of the first person who, finding something like a shell, or a bone, naturally imbedded in gravel or rock, indulged in speculations upon the nature of this thing which he had dug out—this "fossil"—and upon the causes which had brought it into such a position. In this rudimentary form, a high antiquity may safely be ascribed to palaeontology, inasmuch as we know that, 500 years before the Christian era, the philosophic doctrines of Xenophanes were influenced by his observations upon the fossil remains exposed in the quarries of Syracuse. From this time forth not only the philosophers, but the poets, the historians, the geographers of antiquity occasionally refer to fossils; and, after the revival of learning, lively controversies arose respecting their real nature. But hardly more than two centuries have elapsed since this fundamental problem was first exhaustively treated; it was only in the last century that the archaeological value of fossils—their importance, I mean, as records of the history of the earth—was fully recognised; the first adequate investigation of the fossil remains of any large group of vertebrated animals is to be found in Cuvier's "Recherches sur les Ossemens Fossiles," completed in 1822; and, so modern is stratigraphical palaeontology, that its founder, William Smith, lived to receive the just recognition of his services by the award of the first Wollaston Medal in 1831.

But, although palaeontology is a comparatively youthful scientific speciality, the mass of materials with which it has to deal is already prodigious. In the last fifty years the number of known fossil remains of invertebrated animals has been trebled or quadrupled. The work of interpretation of vertebrate fossils, the foundations of which were so solidly laid by Cuvier, was carried on, with wonderful vigour and success, by Agassiz in Switzerland, by Von Meyer in Germany, and last, but not least, by Owen in this country, while, in later years, a multitude of workers have laboured in the same field. In many groups of the animal kingdom the number of fossil forms already known is as great as that of the existing species. In some cases it is much greater; and there are entire orders of animals of the existence of which we should know nothing except for the evidence afforded by fossil remains. With all this it may be safely assumed that, at the present moment, we are not acquainted with a tittle of the fossils which will sooner or later be discovered. If we may judge by the profusion yielded within the last few years by the Tertiary formations of North America, there seems to be no limit to the multitude of mammalian remains to be expected from that continent; and analogy leads us to expect similar riches in Eastern Asia, whenever the Tertiary formations of that region are as carefully explored. Again, we have, as yet, almost everything to learn respecting the terrestrial population of the Mesozoic epoch; and it seems as if the Western territories of the United States were about to prove as instructive in regard to this point as they have in respect of tertiary life. My friend Professor Marsh informs me that, within two years, remains of more than 160 distinct individuals of mammals, belonging to twenty species and nine genera, have been found in a space not larger than the floor of a good-sized room; while beds of the same age have yielded 300 reptiles, varying in size from a length of 60 feet or 80 feet to the dimensions of a rabbit.

The task which I have set myself to-night is to endeavour to lay before you, as briefly as possible, a sketch of the successive steps by which our present knowledge of the facts of palaeontology and of those conclusions from them which are indisputable, has been attained; and I beg leave to remind you, at the outset, that in attempting to sketch the progress of a branch of knowledge to which innumerable labours have contributed, my business is rather with generalisations than with details. It is my object to mark the epochs of palaeontology, not to recount all the events of its history.

That which I just now called the fundamental problem of palaeontology, the question which has to be settled before any other can be profitably discussed, is this, What is the nature of fossils? Are they, as the healthy common sense of the ancient Greeks appears to have led them to assume without hesitation, the remains of animals and plants?...