The Rescue A Romance of the Shallows 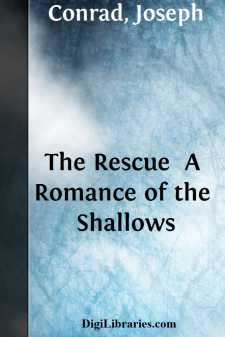 PART I. THE MAN AND THE BRIG

The shallow sea that foams and murmurs on the shores of the thousand islands, big and little, which make up the Malay Archipelago has been for centuries the scene of adventurous undertakings. The vices and the virtues of four nations have been displayed in the conquest of that region that even to this day has not been robbed of all the mystery and romance of its past—and the race of men who had fought against the Portuguese, the Spaniards, the Dutch and the English, has not been changed by the unavoidable defeat. They have kept to this day their love of liberty, their fanatical devotion to their chiefs, their blind fidelity in friendship and hate—all their lawful and unlawful instincts. Their country of land and water—for the sea was as much their country as the earth of their islands—has fallen a prey to the western race—the reward of superior strength if not of superior virtue. To-morrow the advancing civilization will obliterate the marks of a long struggle in the accomplishment of its inevitable victory.

The adventurers who began that struggle have left no descendants. The ideas of the world changed too quickly for that. But even far into the present century they have had successors. Almost in our own day we have seen one of them—a true adventurer in his devotion to his impulse—a man of high mind and of pure heart, lay the foundation of a flourishing state on the ideas of pity and justice. He recognized chivalrously the claims of the conquered; he was a disinterested adventurer, and the reward of his noble instincts is in the veneration with which a strange and faithful race cherish his memory.

Misunderstood and traduced in life, the glory of his achievement has vindicated the purity of his motives. He belongs to history. But there were others—obscure adventurers who had not his advantages of birth, position, and intelligence; who had only his sympathy with the people of forests and sea he understood and loved so well. They can not be said to be forgotten since they have not been known at all. They were lost in the common crowd of seamen-traders of the Archipelago, and if they emerged from their obscurity it was only to be condemned as law-breakers. Their lives were thrown away for a cause that had no right to exist in the face of an irresistible and orderly progress—their thoughtless lives guided by a simple feeling.

But the wasted lives, for the few who know, have tinged with romance the region of shallow waters and forest-clad islands, that lies far east, and still mysterious between the deep waters of two oceans.

Out of the level blue of a shallow sea Carimata raises a lofty barrenness of grey and yellow tints, the drab eminence of its arid heights. Separated by a narrow strip of water, Suroeton, to the west, shows a curved and ridged outline resembling the backbone of a stooping giant. And to the eastward a troop of insignificant islets stand effaced, indistinct, with vague features that seem to melt into the gathering shadows....