The Religion of the Ancient Celts

by J. A. MacCulloch 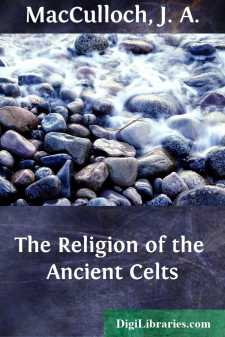 To summon a dead religion from its forgotten grave and to make it tell its story, would require an enchanter's wand. Other old faiths, of Egypt, Babylon, Greece, Rome, are known to us. But in their case liturgies, myths, theogonies, theologies, and the accessories of cult, remain to yield their report of the outward form of human belief and aspiration. How scanty, on the other hand, are the records of Celtic religion! The bygone faith of a people who have inspired the world with noble dreams must be constructed painfully, and often in fear and trembling, out of fragmentary and, in many cases, transformed remains.

We have the surface observations of classical observers, dedications in the Romano-Celtic area to gods mostly assimilated to the gods of the conquerors, figured monuments mainly of the same period, coins, symbols, place and personal names. For the Irish Celts there is a mass of written material found mainly in eleventh and twelfth century MSS. Much of this, in spite of alteration and excision, is based on divine and heroic myths, and it also contains occasional notices of ritual. From Wales come documents like the Mabinogion, and strange poems the personages of which are ancient gods transformed, but which tell nothing of rite or cult. Valuable hints are furnished by early ecclesiastical documents, but more important is existing folk-custom, which preserves so much of the old cult, though it has lost its meaning to those who now use it. Folk-tales may also be inquired of, if we discriminate between what in them is Celtic and what is universal. Lastly, Celtic burial-mounds and other remains yield their testimony to ancient belief and custom.

From these sources we try to rebuild Celtic paganism and to guess at its inner spirit, though we are working in the twilight on a heap of fragments. No Celt has left us a record of his faith and practice, and the unwritten poems of the Druids died with them. Yet from these fragments we see the Celt as the seeker after God, linking himself by strong ties to the unseen, and eager to conquer the unknown by religious rite or magic art. For the things of the spirit have never appealed in vain to the Celtic soul, and long ago classical observers were struck with the religiosity of the Celts. They neither forgot nor transgressed the law of the gods, and they thought that no good befell men apart from their will. The submission of the Celts to the Druids shows how they welcomed authority in matters of religion, and all Celtic regions have been characterised by religious devotion, easily passing over to superstition, and by loyalty to ideals and lost causes. The Celts were born dreamers, as their exquisite Elysium belief will show, and much that is spiritual and romantic in more than one European literature is due to them.

The analogy of religious evolution in other faiths helps us in reconstructing that of the Celts. Though no historic Celtic group was racially pure, the profound influence of the Celtic temperament soon "Celticised" the religious contributions of the non-Celtic element which may already have had many Celtic parallels....