The Reflections of Ambrosine A Novel 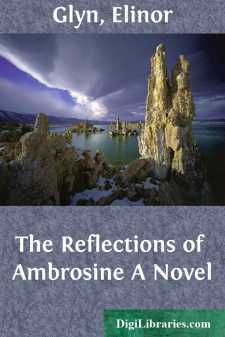 I have wondered sometimes if there are not perhaps some disadvantages in having really blue blood in one's veins, like grandmamma and me. For instance, if we were ordinary, common people our teeth would chatter naturally with cold when we have to go to bed without fires in our rooms in December; but we pretend we like sleeping in "well-aired rooms"—at least I have to. Grandmamma simply says we are obliged to make these small economies, and to grumble would be to lose a trick to fate.

"Rebel if you can improve matters," she often tells me, "but otherwise accept them with calmness."

We have had to accept a good many things with calmness since papa made that tiresome speculation in South America. Before that we had a nice apartment in Paris and as many fires as we wished. However, in spite of the comfort, grandmamma hated papa's "making" money. It was not the career of a gentleman, she said, and when the smash came and one heard no more of papa, I have an idea she was almost relieved.

We came first over to England, and, after long wanderings backward and forward, took this little furnished place at the corner of Ledstone Park. It is just a cottage—once a keeper's, I believe—and we have only Hephzibah and a wretched servant-girl to wait on us. Hephzibah was my nurse in America before we ever went to Paris, and she is as ugly as a card-board face on Guy Fawkes day, and as good as gold.

Grandmamma has had a worrying life. She was brought up at the court of Charles X.—can one believe it, all those years ago!—her family up to that having lived in Ireland since the great Revolution. Indeed, her mother was Irish, and I think grandmamma still speaks French with an accent. (I hope she will never know I said that.) Her name was Mademoiselle de Calincourt, the daughter of the Marquis de Calincourt, whose family had owned Calincourt since the time of Charlemagne or something before that. So it was annoying for them to have had their heads chopped off and to be obliged to live in Dublin on nothing a year. The grandmother of grandmamma, Ambrosine Eustasie de Calincourt, after whom I am called, was a famous character. She was so good-looking that Robespierre offered to let her retain her head if she would give him a kiss, but she preferred to drive to the guillotine in the cart with her friends, only she took a rose to keep off the smell of the common people, and, they say, ran up the steps smiling. Grandmamma has her miniature, and it is, she says, exactly like me.

I have heard that grandmamma's marriage with grandpapa—an Englishman—was considered at the time to be a very suitable affair. He had also ancestors since before Edward the Confessor. However, unfortunately, a few years after their marriage (grandmamma was really un peu passée when that took place) grandpapa made a bêtise—something political or diplomatic, but I have never heard exactly what; anyway, it obliged them to leave hurriedly and go to America. Grandmamma never speaks of her life there or of grandpapa, so I suppose he died, because when I first remember things we were crossing to France in a big ship—just papa, grandmamma, and I....