The Rape of the Lock and Other Poems 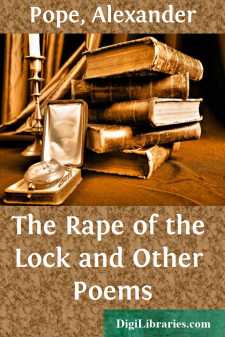 Perhaps no other great poet in English Literature has been so differently judged at different times as Alexander Pope. Accepted almost on his first appearance as one of the leading poets of the day, he rapidly became recognized as the foremost man of letters of his age. He held this position throughout his life, and for over half a century after his death his works were considered not only as masterpieces, but as the finest models of poetry. With the change of poetic temper that occurred at the beginning of the nineteenth century Pope's fame was overshadowed. The romantic poets and critics even raised the question whether Pope was a poet at all. And as his poetical fame diminished, the harsh judgments of his personal character increased. It is almost incredible with what exulting bitterness critics and editors of Pope have tracked out and exposed his petty intrigues, exaggerated his delinquencies, misrepresented his actions, attempted in short to blast his character as a man.

Both as a man and as a poet Pope is sadly in need of a defender to-day. And a defense is by no means impossible. The depreciation of Pope's poetry springs, in the main, from an attempt to measure it by other standards than those which he and his age recognized. The attacks upon his character are due, in large measure, to a misunderstanding of the spirit of the times in which he lived and to a forgetfulness of the special circumstances of his own life. Tried in a fair court by impartial judges Pope as a poet would be awarded a place, if not among the noblest singers, at least high among poets of the second order. And the flaws of character which even his warmest apologist must admit would on the one hand be explained, if not excused, by circumstances, and on the other more than counterbalanced by the existence of noble qualities to which his assailants seem to have been quite blind.

Alexander Pope was born in London on May 21, 1688. His father was a Roman Catholic linen draper, who had married a second time. Pope was the only child of this marriage, and seems to have been a delicate, sweet-tempered, precocious, and, perhaps, a rather spoiled child.

Pope's religion and his chronic ill-health are two facts of the highest importance to be taken into consideration in any study of his life or judgment of his character. The high hopes of the Catholics for a restoration of their religion had been totally destroyed by the Revolution of 1688. During all Pope's lifetime they were a sect at once feared, hated, and oppressed by the severest laws. They were excluded from the schools and universities, they were burdened with double taxes, and forbidden to acquire real estate. All public careers were closed to them, and their property and even their persons were in times of excitement at the mercy of informers. In the last year of Pope's life a proclamation was issued forbidding Catholics to come within ten miles of London, and Pope himself, in spite of his influential friends, thought it wise to comply with this edict....