by A. Frederick (Archie Frederick) Collins 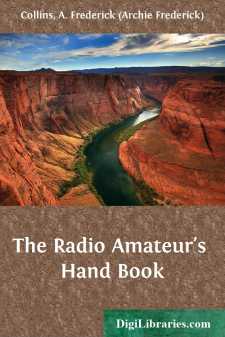 Before delving into the mysteries of receiving and sending messages without wires, a word as to the history of the art and its present day applications may be of service. While popular interest in the subject has gone forward by leaps and bounds within the last two or three years, it has been a matter of scientific experiment for more than a quarter of a century.

The wireless telegraph was invented by William Marconi, at Bologna, Italy, in 1896, and in his first experiments he sent dot and dash signals to a distance of 200 or 300 feet. The wireless telephone was invented by the author of this book at Narberth, Penn., in 1899, and in his first experiments the human voice was transmitted to a distance of three blocks.

The first vital experiments that led up to the invention of the wireless telegraph were made by Heinrich Hertz, of Germany, in 1888 when he showed that the spark of an induction coil set up electric oscillations in an open circuit, and that the energy of these waves was, in turn, sent out in the form of electric waves. He also showed how they could be received at a distance by means of a ring detector, which he called a resonator

In 1890, Edward Branly, of France, showed that metal filings in a tube cohered when electric waves acted on them, and this device he termed a radio conductor; this was improved upon by Sir Oliver Lodge, who called it a coherer. In 1895, Alexander Popoff, of Russia, constructed a receiving set for the study of atmospheric electricity, and this arrangement was the earliest on record of the use of a detector connected with an aerial and the earth.

Marconi was the first to connect an aerial to one side of a spark gap and a ground to the other side of it. He used an induction coil to energize the spark gap, and a telegraph key in the primary circuit to break up the current into signals. Adding a Morse register, which printed the dot and dash messages on a tape, to the Popoff receptor he produced the first system for sending and receiving wireless telegraph messages.

After Marconi had shown the world how to telegraph without connecting wires it would seem, on first thought, to be an easy matter to telephone without wires, but not so, for the electric spark sets up damped and periodic oscillations and these cannot be used for transmitting speech. Instead, the oscillations must be of constant amplitude and continuous. That a direct current arc light transforms a part of its energy into electric oscillations was shown by Firth and Rogers, of England, in 1893.

The author was the first to connect an arc lamp with an aerial and a ground, and to use a microphone transmitter to modulate the sustained oscillations so set up. The receiving apparatus consisted of a variable contact, known as a pill-box detector, which Sir Oliver Lodge had devised, and to this was connected an Ericsson telephone receiver, then the most sensitive made. A later improvement for setting up sustained oscillations was the author's rotating oscillation arc.

Since those memorable days of more than two decades ago, wonderful advances have been made in both of these methods of transmitting intelligence, and the end is as yet nowhere in sight. Twelve or fifteen years ago the boys began to get fun out of listening-in to what the ship and shore stations were sending and, further, they began to do a little sending on their own account....