The Quest of the Silver Fleece A Novel 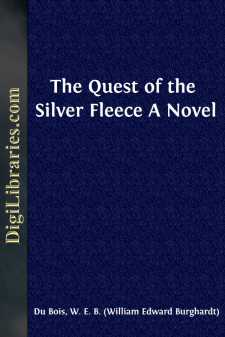 Night fell. The red waters of the swamp grew sinister and sullen. The tall pines lost their slimness and stood in wide blurred blotches all across the way, and a great shadowy bird arose, wheeled and melted, murmuring, into the black-green sky.

The boy wearily dropped his heavy bundle and stood still, listening as the voice of crickets split the shadows and made the silence audible. A tear wandered down his brown cheek. They were at supper now, he whispered—the father and old mother, away back yonder beyond the night. They were far away; they would never be as near as once they had been, for he had stepped into the world. And the cat and Old Billy—ah, but the world was a lonely thing, so wide and tall and empty! And so bare, so bitter bare! Somehow he had never dreamed of the world as lonely before; he had fared forth to beckoning hands and luring, and to the eager hum of human voices, as of some great, swelling music.

Yet now he was alone; the empty night was closing all about him here in a strange land, and he was afraid. The bundle with his earthly treasure had hung heavy and heavier on his shoulder; his little horde of money was tightly wadded in his sock, and the school lay hidden somewhere far away in the shadows. He wondered how far it was; he looked and harkened, starting at his own heartbeats, and fearing more and more the long dark fingers of the night.

Then of a sudden up from the darkness came music. It was human music, but of a wildness and a weirdness that startled the boy as it fluttered and danced across the dull red waters of the swamp. He hesitated, then impelled by some strange power, left the highway and slipped into the forest of the swamp, shrinking, yet following the song hungrily and half forgetting his fear. A harsher, shriller note struck in as of many and ruder voices; but above it flew the first sweet music, birdlike, abandoned, and the boy crept closer.

The cabin crouched ragged and black at the edge of black waters. An old chimney leaned drunkenly against it, raging with fire and smoke, while through the chinks winked red gleams of warmth and wild cheer. With a revel of shouting and noise, the music suddenly ceased. Hoarse staccato cries and peals of laughter shook the old hut, and as the boy stood there peering through the black trees, abruptly the door flew open and a flood of light illumined the wood.

Amid this mighty halo, as on clouds of flame, a girl was dancing. She was black, and lithe, and tall, and willowy. Her garments twined and flew around the delicate moulding of her dark, young, half-naked limbs. A heavy mass of hair clung motionless to her wide forehead. Her arms twirled and flickered, and body and soul seemed quivering and whirring in the poetry of her motion.

As she danced she sang. He heard her voice as before, fluttering like a bird's in the full sweetness of her utter music. It was no tune nor melody, it was just formless, boundless music. The boy forgot himself and all the world besides....