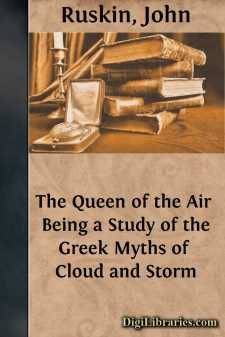 ATHENA CHALINITIS.*(Athena in the Heavens.)

* "Athena the Restrainer." The name is given to her as having helpedBellerophon to bridle Pegasus, the flying cloud.

LECTURE ON THE GREEK MYTHS OF STORM, GIVEN (PARTLY) IN UNIVERSITY COLLEGE, LONDON, MARCH 9, 1869.

1. I will not ask your pardon for endeavoring to interest you in the subject of Greek Mythology; but I must ask your permission to approach it in a temper differing from that in which it is frequently treated. We cannot justly interpret the religion of any people, unless we are prepared to admit that we ourselves, as well as they, are liable to error in matters of faith; and that the convictions of others, however singular, may in some points have been well founded, while our own, however reasonable, may be in some particulars mistaken. You must forgive me, therefore, for not always distinctively calling the creeds of the past "superstition," and the creeds of the present day "religion;" as well as for assuming that a faith now confessed may sometimes be superficial, and that a faith long forgotten may once have been sincere. It is the task of the Divine to condemn the errors of antiquity, and of the philologists to account for them; I will only pray you to read, with patience, and human sympathy, the thoughts of men who lived without blame in a darkness they could not dispel; and to remember that, whatever charge of folly may justly attach to the saying, "There is no God," the folly is prouder, deeper, and less pardonable, in saying, "There is no God but for me."

2. A myth, in its simplest definition, is a story with a meaning attached to it other than it seems to have at first; and the fact that it has such a meaning is generally marked by some of its circumstances being extraordinary, or, in the common use of the word, unnatural. Thus if I tell you that Hercules killed a water-serpent in the lake of Lerna, and if I mean, and you understand, nothing more than that fact, the story, whether true or false, is not a myth. But if by telling you this, I mean that Hercules purified the stagnation of many streams from deadly miasmata, my story, however simple, is a true myth; only, as, if I leftit in that simplicity, you would probably look for nothing beyond, it will be wise in me to surprise your attention by adding some singular circumstance; for instance, that the water-snake had several heads, which revived as fast as they were killed, and which poisoned even the foot that trod upon them as they slept. And in proportion to the fulness of intended meaning I shall probably multiply and refine upon these improbabilities; as, suppose, if, instead of desiring only to tell you that Hercules purified a marsh, I wished you to understand that he contended with the venom and vapor of envy and evil ambition, whether in other men's souls or in his own, and choked that malaria only by supreme toil,—I might tell you that this serpent was formed by the goddess whose pride was in the trial of Hercules; and that its place of abode as by a palm-tree; and that for every head of it that was cut off, two rose up with renewed life; and that the hero found at last that he could not kill the creature at all by cutting its heads off or crushing them, but only by burning them down; and that the midmost of them could not be killed even that way, but had to be buried alive....