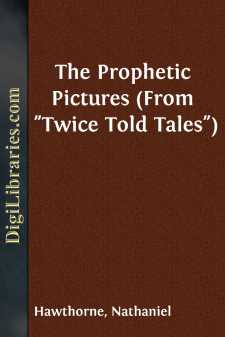 "But this painter!" cried Walter Ludlow, with animation. "He not only excels in his peculiar art, but possesses vast acquirements in all other learning and science. He talks Hebrew with Dr. Mather, and gives lectures in anatomy to Dr. Boylston. In a word, he will meet the best instructed man among us, on his own ground. Moreover, he is a polished gentleman,—a citizen of the world,—yes, a true cosmopolite; for he will speak like a native of each clime and country on the globe, except our own forests, whither he is now going. Nor is all this what I most admire in him."

"Indeed!" said Elinor, who had listened with a woman's interest to the description of such a man. "Yet this is admirable enough."

"Surely it is," replied her lover, "but far less so than his natural gift of adapting himself to every variety of character, insomuch that all men—and all women too, Elinor—shall find a mirror of themselves in this wonderful painter. But the greatest wonder is yet to be told."

"Nay, if he have more wonderful attributes than these," said Elinor, laughing, "Boston is a perilous abode for the poor gentleman. Are you telling one of a painter, or a wizard?"

"In truth," answered he, "that question might be asked much more seriously than you suppose. They say that he paints not merely a man's features, but his mind and heart. He catches the secret sentiments and passions, and throws them upon the canvas, like sunshine,—or perhaps, in the portraits of dark-souled men, like a gleans of infernal fire. It is an awful gift," added Walter, lowering his voice from its tone of enthusiasm. "I shall be almost afraid to sit to him."

"Walter, are you in earnest?" exclaimed Elinor.

"For Heaven's sake, dearest Elinor, do not let him paint the look which you now wear," said her lover, smiling, though rather perplexed. "There: it is passing away now, but when you spoke, you seemed frightened to death, and very sad besides. What were you thinking of?"

"Nothing, nothing," answered Elinor, hastily. "You paint my face with your own fantasies. Well, come for me to-morrow, and we will visit this wonderful artist."

But when the young man had departed, it cannot be denied that a remarkable expression was again visible on the fair and youthful face of his mistress. It was a sad and anxious look, little in accordance with what should have been the feelings of a maiden on the eve of wedlock. Yet Walter Ludlow was the chosen of her heart.

"A look!" said Elinor to herself. "No wonder that it startled him, if it expressed what I sometimes feel. I know, by my own experience, how frightful a look may be. But it was all fancy. I thought nothing of it at the time,—I have seen nothing of it since,—I did but dream it."

And she busied herself about the embroidery of a ruff, in which she meant that her portrait should be taken.

The painter, of whom they had been speaking, was not one of those native artists, who, at a later period than this, borrowed their colors from the Indians, and manufactured their pencils of the furs of wild beasts. Perhaps, if he could have revoked his life and prearranged his destiny, he might have chosen to belong to that school without a master, in the hope of being at least original, since there were no works of art to imitate, nor rules to follow. But he had been born and educated in Europe. People said, that he had studied the grandeur or beauty of conception, and every touch of the master hand, in all the most famous pictures, in cabinets and galleries, and on the walls of churches, till there was nothing more for his powerful mind to learn....