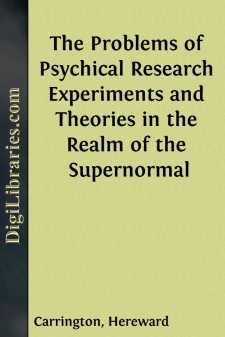 In the following pages I have dealt chiefly with the mental or psychological phenomena of psychical research, and have not touched upon the "physical" manifestations to any extent. The book is mostly theoretical and constructive in tone; and, because of its speculative character, it may, perhaps, prove of value to future psychical investigators. It represents the author's conclusions after several years' experimentation; and, in a field so new as this, scientific hypotheses and speculations are assuredly helpful—indicating the road we must travel, and the possible interpretation of certain facts, which have been accumulated in the past, as the result of years of laborious research. I believe that practically all the phenomena of spiritualism are true; that is, that they have occurred in a genuine manner from time to time in the past; that they are supernormal in character, and are genuine phenomenal occurrences. But as to the further question: "What is the nature of the intelligence lying behind and controlling these phenomena?"—that, I think, is as yet unsolved, and is likely to remain so for some time to come. I do not believe that the simple spiritistic explanation—especially as at present held—is the correct one, nor one that explains all the facts; for I believe that the phenomena are more complicated than this. Nor are the ordinary psychological explanations at present in vogue adequate to cover them. The explanation is yet to seek; and the solution will only be found when a sufficient number of facts have been accumulated and the various explanatory theories have been tested,—to see which of them is really adequate. My hope is that the present book may help to accomplish this result by supplying a little in both directions!

The present edition of this book is to some extent an abridgement of the first edition, which appeared some seven years ago. I have, for instance, omitted a number of "cases" which were originally included, and also my "sittings" with Mrs. Piper—which material will be published at a later date in another volume. I have also omitted the original First Chapter,—since much of this material was subsequently included in my Modern Psychical Phenomena. On the other hand, I have included a new chapter on Recent Experiments in Psychic Photography,—composed partly of original and hitherto unpublished material, and partly of the experiments undertaken, some years ago, by Dr. Baraduc,—in "photographing the soul." The account of his experiments was originally published in my book, Death: its Causes and Phenomena, but they are now included here as being more in line with other experiments recently undertaken in this field. I have also added a brief chapter on the Scientific Investigation of Psychic Phenomena by means of Laboratory Instruments.

A word, finally, as to the necessarily slow progress which has been and is being made in the study of "psychics." As this objection is often raised, I cannot do better, perhaps, than to quote an admirable passage from Prof. William James (Memories and Studies, pp. 175-76), where he says:—

"For twenty-five years I have been in touch with the literature of psychical research, and have had acquaintance with numerous 'researchers.' I have also spent a good many hours (though far fewer than I should have spent) in witnessing (or trying to witness) phenomena. Yet I am theoretically no 'further' than I was at the beginning; and I confess that at times I have been tempted to believe that the Creator has eternally intended this department of nature to remain baffling,—to prompt our curiosities and hopes and suspicions all in equal measure, so that, although ghosts and clairvoyances, and raps and messages from spirits, are always seeming to exist and can never be fully explained away, they also can never be susceptible of full corroboration.... It is hard to believe, however, that the Creator has really put any big array of phenomena into the world merely to defy and mock our scientific tendencies; so my deeper belief is that we psychical researchers have been too precipitate in our hopes, and that we must expect to mark progress not by quarter-centuries, but by half-centuries or whole centuries."

In the present book, I have endeavoured to show why this must necessarily be so; also to indicate the manner in which the subject may be studied in order to arrive at definite knowledge at an earlier date than might otherwise be possible....