The Principles of English Versification 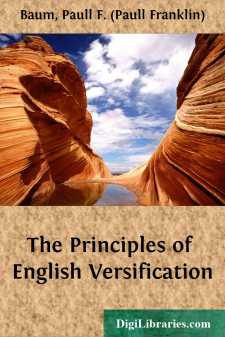 Add to My Favorites
Published: 9 years ago
Downloads: 121
Rating: (0 Votes)

Most of the older discussions of English versification labored under two difficulties: an undue adherence to the traditions of Greek and Latin prosody more or less perfectly understood, and an exaggerated formalism. But recently the interest and excitement (now happily abated) over free-verse have reopened the old questions and let in upon them not a little light. Even today, however, a great deal of metrical analysis has wrecked itself on the visible rocks of a false accuracy, and it is therefore not only out of caution but also out of mere common sense that we should eschew the arbitrary, even at the risk of vagueness and an 'unscientific' admission of uncertainty. For the only great and annihilating danger of writing on versification is dogmatism. Our theorists, both old and new, are first tempted and then possessed with their theories—all else becoming wrong and intolerable. In the following pages I have perhaps erred in a too frequent insistence on doubts and perplexities; perhaps also, on occasion, in a too plain statement of opinion where judgments are bound to differ—sic se res habent.

Now it is plain that rhythm is one of the ultimate facts of nature and one of the universal principles of art; and thus versification, which is the study of the rhythms of verse, is both a science and an art. But it differs from the other sciences in that its phenomena are not 'regular' and reducible to law, but varying and subject to the dictates, even the whims, of genius; inasmuch as every poem involves a fresh fiat of creation. Of course, no poet when he is composing, either in the traditional "fine frenzy" or in the more sober process of revision, thinks of prosody as a science, or perhaps thinks of it at all. If he did he would go mad, and produce nothing. But the phenomena remain, nevertheless, and the analysis of them becomes for us a science.

This analysis has what Bacon would call two inconveniences. The first is complexity. The various ways in which the formal rhythms of verse combine with the infinitely modulated rhythms of natural prose produce a resultant which is complicated to the last degree and which almost precludes orderly exposition. No system has been devised to express it. The simpler ones fail through omission of important difficulties, the more elaborate totter under their own weight. And thus the Gentle Reader is either beguiled by false prophets—looks up and is not fed—or loses heart and saves himself by flight. There is, to be sure, an arcanum of prosodic theory which is the province of specialists. It has its place in the scheme of things; but it is no more necessary for the genuine enjoyment of Milton (or the 'moderns') than a knowledge of the formulae for calculating the parallax of Alpha Leonis is necessary for enjoying the pillared firmament. We must then compromise with a system which reveals the existence of all the phenomena and tries to suggest their interrelated workings.

The other inconvenience is that of seeming to deny the real poetry by our preoccupation with its metrical expression....