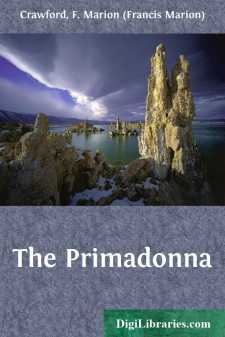 When the accident happened, Cordova was singing the mad scene in Lucia for the last time in that season, and she had never sung it better. The Bride of Lammermoor is the greatest love-story ever written, and it was nothing short of desecration to make a libretto of it; but so far as the last act is concerned the opera certainly conveys the impression that the heroine is a raving lunatic. Only a crazy woman could express feeling in such an unusual way.

Cordova's face was nothing but a mask of powder, in which her handsome brown eyes would have looked like two holes if she had not kept them half shut under the heavily whitened lids; her hands were chalked too, and they were like plaster casts of hands, cleverly jointed at the wrists. She wore a garment which was supposed to be a nightdress, which resembled a very expensive modern shroud, and which was evidently put on over a good many other things. There was a deal of lace on it, which fluttered when she made her hands shake to accompany each trill, and all this really contributed to the general impression of insanity. Possibly it was overdone; but if any one in the audience had seen such a young person enter his or her room unexpectedly, and uttering such unaccountable sounds, he or she would most assuredly have rung for a doctor and a cab, and for a strait-jacket if such a thing were to be had in the neighbourhood.

An elderly man, with very marked features and iron-grey hair, sat in the fifth row of the stalls, on the right-hand aisle. He was a bony man, and the people behind him noticed him and thought he looked strong. He had heard Bonanni in her best days and many great lyric sopranos from Patti to Melba, and he was thinking that none of them had sung the mad scene better than Cordova, who had only been on the stage two years, and was now in New York for the first time. But he had already heard her in London and Paris, and he knew her. He had first met her at a breakfast on board Logotheti's yacht at Cap Martin. Logotheti was a young Greek financier who lived in Paris and wanted to marry her. He was rather mad, and had tried to carry her off on the night of the dress rehearsal before her début, but had somehow got himself locked up for somebody else. Since then he had grown calmer, but he still worshipped at the shrine of the Cordova. He was not the only one, however; there were several, including the very distinguished English man of letters, Edmund Lushington, who had known her before she had begun to sing on the stage.

But Lushington was in England and Logotheti was in Paris, and on the night of the accident Cordova had not many acquaintances in the house besides the bony man with grey hair; for though society had been anxious to feed her and get her to sing for nothing, and to play bridge with her, she had never been inclined to accept those attentions. Society in New York claimed her, on the ground that she was a lady and was an American on her mother's side. Yet she insisted on calling herself a professional, because singing was her profession, and society thought this so strange that it at once became suspicious and invented wild and unedifying stories about her; and the reporters haunted the lobby of her hotel, and gossiped with their friends the detectives, who also spent much time there in a professional way for the general good, and were generally what English workmen call wet smokers....