The Price of Things 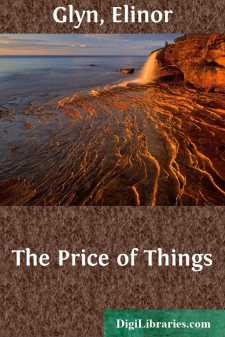 "If one consciously and deliberately desires happiness on this plane," said the Russian, "one must have sufficient strength of will to banish all thought. The moment that one begins to probe the meaning of things, one has opened Pandora's box and it may be many lives before one discovers hope lying at the bottom of it."

"What do you mean by thought? How can one not think?" Amaryllis Ardayre's large grey eyes opened in a puzzled way. She was on her honeymoon in Paris at a party at the Russian Embassy, and until now had accepted things and not speculated about them. She had lived in the country and was as good as gold.

She was accepting her honeymoon with her accustomed calm, although it was not causing her any of the thrills which Elsie Goldmore, her school friend, had assured her she should discover therein.

Honeymoons! Heavens! But perhaps it was because Sir John was dull. He looked dull, she thought, as he stood there talking to the Ambassador. A fine figure of an Englishman but—yes—dull. The Russian, on the contrary, was not dull. He was huge and ugly and rough-hewn—his eyes were yellowish-green and slanted upwards and his face was frankly Calmuck. But you knew that you were talking to a personality—to one who had probably a number of unknown possibilities about him tucked away somewhere.

John had none of these. One could be certain of exactly what he would do on any given occasion—and it would always be his duty. The Russian was observing this charming English bride critically; she was such a perfect specimen of that estimable race—well-shaped, refined and healthy. Chock full of temperament too, he reflected—when she should discover herself. Temperament and romance and even passion, and there were shrewdness and commonsense as well.

"An agreeable task for a man to undertake her education," and he wished that he had time.

"How can one not think? I am always thinking."

"Oh! no, you are not—you only imagine that you are. You have questioned nothing—you do right generally because you have a nice character and have been well brought up, not from any conscious determination to uplift the soul. Yes—is it not so?"

"Do you ever ask yourself what things mean? What we are—where we are going? What is the end of it all? No—you are happy; you live from day to day—and yet you cannot be a very young ego, your eyes are too wise—you have had many incarnations. It is merely that in this one life the note of awakening has not yet been struck. You certainly must have needed sleep."

"Many lives? You believe in that theory?"

She was not accustomed to discuss unorthodox subjects. She was interested.

"But of course—how else could there be justice? We draw the reflex of every evil action and of every good one, but sometimes not until the next incarnation, that is why the heedless ones cannot grasp the truth—they see no visible result of either good or evil—evil, in fact, seems generally to win if there is a balance either way."

"Why are we not allowed memory then, so that we might profit by our lessons?"

"We should in that case improve from self-interest and not have our faults eliminated by suffering....