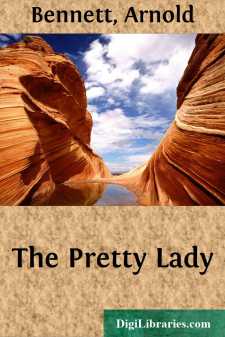 The piece was a West End success so brilliant that even if you belonged to the intellectual despisers of the British theatre you could not hold up your head in the world unless you had seen it; even for such as you it was undeniably a success of curiosity at least.

The stage scene flamed extravagantly with crude orange and viridian light, a rectangle of bedazzling illumination; on the boards, in the midst of great width, with great depth behind them and arching height above, tiny squeaking figures ogled the primeval passion in gesture and innuendo. From the arc of the upper circle convergent beams of light pierced through gloom and broke violently on this group of the half-clad lovely and the swathed grotesque. The group did not quail. In fullest publicity it was licensed to say that which in private could not be said where men and women meet, and that which could not be printed. It gave a voice to the silent appeal of pictures and posters and illustrated weeklies all over the town; it disturbed the silence of the most secret groves in the vast, undiscovered hearts of men and women young and old. The half-clad lovely were protected from the satyrs in the [8] audience by an impalpable screen made of light and of ascending music in which strings, brass, and concussion exemplified the naïve sensuality of lyrical niggers. The guffaw which, occasionally leaping sharply out of the dim, mysterious auditorium, surged round the silhouetted conductor and drove like a cyclone between the barriers of plush and gilt and fat cupids on to the stage—this huge guffaw seemed to indicate what might have happened if the magic protection of the impalpable screen had not been there.

Behind the audience came the restless Promenade, where was the reality which the stage reflected. There it was, multitudinous, obtainable, seizable, dumbly imploring to be carried off. The stage, very daring, yet dared no more than hint at the existence of the bright and joyous reality. But there it was, under the same roof.

Christine entered with Madame Larivaudière. Between shoulders and broad hats, as through a telescope, she glimpsed in the far distance the illusive, glowing oblong of the stage; then the silhouetted conductor and the tops of instruments; then the dark, curved concentric rows of spectators. Lastly she took in the Promenade, in which she stood. She surveyed the Promenade with a professional eye. It instantly shocked her, not as it might have shocked one ignorant of human nature and history, but by reason of its frigidity, its constraint, its solemnity, its pretence. In one glance she embraced all the figures, moving or stationary, against the hedge of shoulders in front and against the mirrors behind—all of them: the programme girls, the cigarette girls, the chocolate [9] girls, the cloak-room girls, the waiters, the overseers, as well as the vivid courtesans and their clientèle in black, tweed, or khaki. With scarcely an exception they all had the same strange look, the same absence of gesture....