The Portrait of a Lady - Volume 2 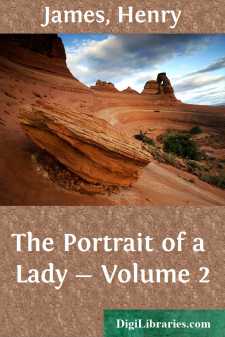 On the morrow, in the evening, Lord Warburton went again to see his friends at their hotel, and at this establishment he learned that they had gone to the opera. He drove to the opera with the idea of paying them a visit in their box after the easy Italian fashion; and when he had obtained his admittance—it was one of the secondary theatres—looked about the large, bare, ill-lighted house. An act had just terminated and he was at liberty to pursue his quest. After scanning two or three tiers of boxes he perceived in one of the largest of these receptacles a lady whom he easily recognised. Miss Archer was seated facing the stage and partly screened by the curtain of the box; and beside her, leaning back in his chair, was Mr. Gilbert Osmond. They appeared to have the place to themselves, and Warburton supposed their companions had taken advantage of the recess to enjoy the relative coolness of the lobby. He stood a while with his eyes on the interesting pair; he asked himself if he should go up and interrupt the harmony. At last he judged that Isabel had seen him, and this accident determined him. There should be no marked holding off. He took his way to the upper regions and on the staircase met Ralph Touchett slowly descending, his hat at the inclination of ennui and his hands where they usually were.

"I saw you below a moment since and was going down to you. I feel lonely and want company," was Ralph's greeting.

"You've some that's very good which you've yet deserted."

"Do you mean my cousin? Oh, she has a visitor and doesn't want me. Then Miss Stackpole and Bantling have gone out to a cafe to eat an ice—Miss Stackpole delights in an ice. I didn't think they wanted me either. The opera's very bad; the women look like laundresses and sing like peacocks. I feel very low."

"You had better go home," Lord Warburton said without affectation.

"And leave my young lady in this sad place? Ah no, I must watch over her."

"She seems to have plenty of friends."

"Yes, that's why I must watch," said Ralph with the same large mock-melancholy.

"No, you're different. Go to the box and stay there while I walk about."

Lord Warburton went to the box, where Isabel's welcome was as to a friend so honourably old that he vaguely asked himself what queer temporal province she was annexing. He exchanged greetings with Mr. Osmond, to whom he had been introduced the day before and who, after he came in, sat blandly apart and silent, as if repudiating competence in the subjects of allusion now probable. It struck her second visitor that Miss Archer had, in operatic conditions, a radiance, even a slight exaltation; as she was, however, at all times a keenly-glancing, quickly-moving, completely animated young woman, he may have been mistaken on this point. Her talk with him moreover pointed to presence of mind; it expressed a kindness so ingenious and deliberate as to indicate that she was in undisturbed possession of her faculties. Poor Lord Warburton had moments of bewilderment. She had discouraged him, formally, as much as a woman could; what business had she then with such arts and such felicities, above all with such tones of reparation—preparation? Her voice had tricks of sweetness, but why play them on HIM? The others came back; the bare, familiar, trivial opera began again. The box was large, and there was room for him to remain if he would sit a little behind and in the dark. He did so for half an hour, while Mr. Osmond remained in front, leaning forward, his elbows on his knees, just behind Isabel. Lord Warburton heard nothing, and from his gloomy corner saw nothing but the clear profile of this young lady defined against the dim illumination of the house. When there was another interval no one moved. Mr. Osmond talked to Isabel, and Lord Warburton kept his corner. He did so but for a short time, however; after which he got up and bade good-night to the ladies. Isabel said nothing to detain him, but it didn't prevent his being puzzled again. Why should she mark so one of his values—quite the wrong one—when she would have nothing to do with another, which was quite the right? He was angry with himself for being puzzled, and then angry for being angry. Verdi's music did little to comfort him, and he left the theatre and walked homeward, without knowing his way, through the tortuous, tragic streets of Rome, where heavier sorrows than his had been carried under the stars....