The Portrait of a Lady - Volume 1 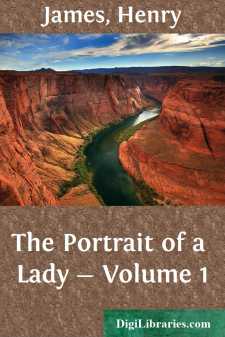 "The Portrait of a Lady" was, like "Roderick Hudson," begun in Florence, during three months spent there in the spring of 1879. Like "Roderick" and like "The American," it had been designed for publication in "The Atlantic Monthly," where it began to appear in 1880. It differed from its two predecessors, however, in finding a course also open to it, from month to month, in "Macmillan's Magazine"; which was to be for me one of the last occasions of simultaneous "serialisation" in the two countries that the changing conditions of literary intercourse between England and the United States had up to then left unaltered. It is a long novel, and I was long in writing it; I remember being again much occupied with it, the following year, during a stay of several weeks made in Venice. I had rooms on Riva Schiavoni, at the top of a house near the passage leading off to San Zaccaria; the waterside life, the wondrous lagoon spread before me, and the ceaseless human chatter of Venice came in at my windows, to which I seem to myself to have been constantly driven, in the fruitless fidget of composition, as if to see whether, out in the blue channel, the ship of some right suggestion, of some better phrase, of the next happy twist of my subject, the next true touch for my canvas, mightn't come into sight. But I recall vividly enough that the response most elicited, in general, to these restless appeals was the rather grim admonition that romantic and historic sites, such as the land of Italy abounds in, offer the artist a questionable aid to concentration when they themselves are not to be the subject of it. They are too rich in their own life and too charged with their own meanings merely to help him out with a lame phrase; they draw him away from his small question to their own greater ones; so that, after a little, he feels, while thus yearning toward them in his difficulty, as if he were asking an army of glorious veterans to help him to arrest a peddler who has given him the wrong change.

There are pages of the book which, in the reading over, have seemed to make me see again the bristling curve of the wide Riva, the large colour-spots of the balconied houses and the repeated undulation of the little hunchbacked bridges, marked by the rise and drop again, with the wave, of foreshortened clicking pedestrians. The Venetian footfall and the Venetian cry—all talk there, wherever uttered, having the pitch of a call across the water—come in once more at the window, renewing one's old impression of the delighted senses and the divided, frustrated mind. How can places that speak IN GENERAL so to the imagination not give it, at the moment, the particular thing it wants? I recollect again and again, in beautiful places, dropping into that wonderment. The real truth is, I think, that they express, under this appeal, only too much—more than, in the given case, one has use for; so that one finds one's self working less congruously, after all, so far as the surrounding picture is concerned, than in presence of the moderate and the neutral, to which we may lend something of the light of our vision....