The Point Of Honor A Military Tale 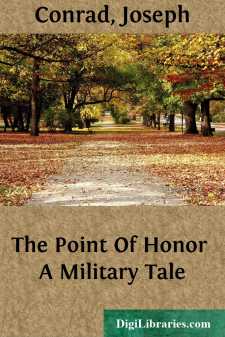 Napoleon the First, whose career had the quality of a duel against the whole of Europe, disliked duelling between the officers of his army. The great military emperor was not a swashbuckler, and had little respect for tradition.

Nevertheless, a story of duelling which became a legend in the army runs through the epic of imperial wars. To the surprise and admiration of their fellows, two officers, like insane artists trying to gild refined gold or paint the lily, pursued their private contest through the years of universal carnage. They were officers of cavalry, and their connection with the high-spirited but fanciful animal which carries men into battle seems particularly appropriate. It would be difficult to imagine for heroes of this legend two officers of infantry of the line, for example, whose fantasy is tamed by much walking exercise and whose valour necessarily must be of a more plodding kind. As to artillery, or engineers whose heads are kept cool on a diet of mathematics, it is simply unthinkable.

The names of the two officers were Feraud and D'Hubert, and they were both lieutenants in a regiment of hussars, but not in the same regiment.

Feraud was doing regimental work, but Lieutenant D'Hubert had the good fortune to be attached to the person of the general commanding the division, as officier d'ordonnance. It was in Strasbourg, and in this agreeable and important garrison, they were enjoying greatly a short interval of peace. They were enjoying it, though both intensely warlike, because it was a sword-sharpening, firelock-cleaning peace dear to a military heart and undamaging to military prestige inasmuch that no one believed in its sincerity or duration.

Under those historical circumstances so favourable to the proper appreciation of military leisure Lieutenant D'Hubert could have been seen one fine afternoon making his way along the street of a cheerful suburb towards Lieutenant Feraud's quarters, which were in a private house with a garden at the back, belonging to an old maiden lady.

His knock at the door was answered instantly by a young maid in Alsatian costume. Her fresh complexion and her long eyelashes, which she lowered modestly at the sight of the tall officer, caused Lieutenant D'Hubert, who was accessible to esthetic impressions, to relax the cold, on-duty expression of his face. At the same time he observed that the girl had over her arm a pair of hussar's breeches, red with a blue stripe.

And the little maid tried to close the door, but Lieutenant D'Hubert, opposing this move with gentle firmness, stepped into the anteroom jingling his spurs.

"Come, my dear. You don't mean to say he has not been home since six o'clock this morning?"

Saying these words, Lieutenant D'Hubert opened without ceremony the door of a room so comfortable and neatly ordered that only from internal evidence in the shape of boots, uniforms and military accoutrements, did he acquire the conviction that it was Lieutenant Feraud's room....