The Plain Man and His Wife 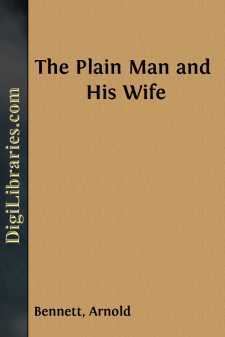 The plain man on a plain day wakes up, slowly or quickly according to his temperament, and greets the day in a mental posture which might be thus expressed in words:

If you ask me whom I mean by the plain man, my reply is that I mean almost every man. I mean you. I certainly mean me. I mean the rich and the poor, the successful and the unsuccessful, the idle and the diligent, the luxurious and the austere. For, what with the limits of digestion, the practical impossibility of wearing two neckties at once, the insecurity of investments, the responsibilities of wealth and of success, the exhaustingness of the search for pleasure, and the cheapness of travel—the real differences between one sort of plain man and another are slight in these times. (And indeed they always were slight.)

The plain man has a lot to do before he may have his breakfast—and he must do it. The tyrannic routine begins instantly he is out of bed. To lave limbs, to shave the jaw, to select clothes and assume them—these things are naught. He must exercise his muscles—all his muscles equally and scientifically—with the aid of a text-book and of diagrams on a large card; which card he often hides if he is expecting visitors in his chamber, for he will not always confess to these exercises; he would have you believe that he alone, in a world of simpletons, is above the faddism of the hour; he is as ashamed of these exercises as of a good resolution, and when his wife happens to burst in on them he will pretend to be doing some common act, such as walking across the room or examining a mole in the small of his back. And yet he will not abandon them. They have an empire over him. To drop them would be to be craven, inefficient. The text-book asserts that they will form one of the pleasantest parts of the day, and that he will learn to look forward to them. He soon learns to look forward to them, but not with glee. He is relieved and proud when they are over for the day.

He would enjoy his breakfast, thanks to the strenuous imitation of diagrams, were it not that, in addition to being generally in a hurry, he is preoccupied. He is preoccupied by the sense of doom, by the sense that he has set out on the appointed path and dare not stray from it. The train or the tram-car or the automobile (same thing) is waiting for him, irrevocable, undeniable, inevitable. He wrenches himself away. He goes forth to his fate, as to the dentist. And just as he would enjoy his breakfast in the home, so he would enjoy his newspaper and cigarette in the vehicle, were it not for that ever-present sense of doom. The idea of business grips him. It matters not what the business is. Business is everything, and everything is business. He reaches his office—whatever his office is. He is in his office. He must plunge—he plunges. The day has genuinely begun now. The appointed path stretches straight in front of him, for five, six, seven, eight hours.