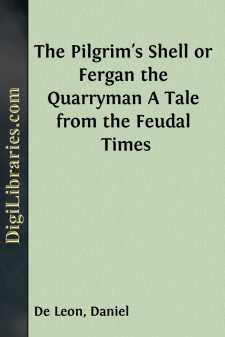 The day touched its close. The autumn sun cast its last rays upon one of the villages of the seigniory of Plouernel. A large number of partly demolished houses bore testimony to having been recently set on fire during one of the wars, frequent during the eleventh century, between the feudal lords of France. The walls of the huts of the village, built in pise, or of stones held together with clayish earth, were cracked or blackened by the flames. There were still in sight, half burnt out, the rafters of the roofings, replaced by a few poles wrapped in bundles of furze or reed-grass.

The aspect of the serfs, just returned from the fields, was no less wretched than that of their hovels. Wan, emaciated, barely dressed in rags, they huddled together, trembling and uneasy. The bailiff, justiciary of the seigniory, had just arrived at the village, accompanied with five or six armed men. Presently, to the number of about three hundred, the serfs gathered around him, a fellow so ill disposed towards the poor, that, to his name of Garin, the nick-name "Serf-eater" had been attached. This dreaded man wore a leather casque furnished with ribs of iron, and a coat of goatskin like his shoes. A long sword hung by his side. He was astride a reddish-brown horse, that looked as savage as its master. Men on foot, variously armed, who made up the escort of Garin the Serf-eater, kept watch over several serfs, bound hands and feet, who were brought in prisoners from other localities. Not far from them lay stretched on the ground a wretched fellow, fearfully mutilated, hideous and horrible to behold. His eyes were knocked in, his feet and hands cut off—a common punishment for rebels. This unfortunate being, hardly covered in rags, the stumps of his arms and legs wrapped in dirty bandages, was waiting for some of his companions in misery, back from the fields, to find time to transport him upon the litter which he shared with the beasts of burden. Blind, and without hands or feet, he found himself thrown upon the charity of his fellows, who now ten years helped him to eat and drink. Other serfs of Normandy and Brittany, had, at the time of the revolt against their lords, been blinded, mutilated like this wretched fellow, and left upon the spot of their punishment to perish in the tortures of hunger.

When the people of the village were gathered on the place, Garin the Serf-eater pulled a parchment out of his pocket and read as follows:

"Witness the order of the very high and very mighty Neroweg VI, lord of the county of Plouernel, by the grace of god. All his serfs and bondsmen, subject to mortmain and taille at his pleasure and mercy, are taxed by the will of the said lord count to pay into his treasury four copper sous per head before the last day of this month at the latest." The serfs, threatened with this fresh exaction, could not restrain their lamentations. Garin the Serf-eater rolled over the assemblage a wrathful eye and proceeded: "If the said sum of four copper pieces per head is not paid before the expiration of the time fixed, it will please the said high and mighty lord Neroweg VI, Count of Plouernel, to cause certain serfs to be seized, and they will be punished, or hanged by his prevost from his seigniorial gibbets. Neither the annual tax, nor the regular dues, is to be lowered in the least by this extraordinary levy of four sous of copper, which is intended to indemnify our said lord for the losses caused by the recent war which his neighbor, the Sire of Castel-Redon, declared against him."

The bailiff descended from his horse to speak to one of the men in his escort. Several serfs muttered to one another: "Where is Fergan? He alone would have the courage to humbly remonstrate with the bailiff that we are wretched, that the taxes, the services, the regular and the extraordinary dues are crushing us, and that it will be impossible for us to pay this tax."

"Fergan must have remained behind in the quarry where he cuts stone," remarked another serf.

Presently, the bailiff continued to read as follows: "Lord Gonthram, eldest son of the very noble, very high and very mighty Neroweg VI, Count of Plouernel, having attained his eighteenth year, and being of knight's age, there shall be paid to him, according to the custom of Plouernel, one denier by each serf and villein of the domain, in honor and to the glory of the knighthood of the said Lord Gonthram. Payment to be made this month."

"Still more!" murmured several of the serfs with bitterness; "it is fortunate that our lord has no daughter, we would some day have to pay taxes in honor of her marriage, as we shall have to pay them in honor of the knighthood of the sons of Neroweg VI....