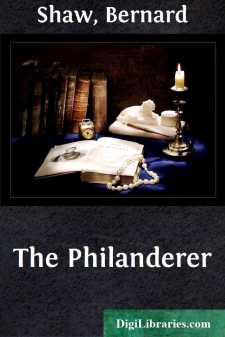 A lady and gentleman are making love to one another in the drawing-room of a flat in Ashly Gardens in the Victoria district of London. It is past ten at night. The walls are hung with theatrical engravings and photographs—Kemble as Hamlet, Mrs. Siddons as Queen Katharine pleading in court, Macready as Werner (after Maclise), Sir Henry Irving as Richard III (after Long), Miss Ellen Terry, Mrs. Kendal, Miss Ada Rehan, Madame Sarah Bernhardt, Mr. Henry Arthur Jones, Mr. A. W. Pinero, Mr. Sydney Grundy, and so on, but not the Signora Duse or anyone connected with Ibsen. The room is not a perfect square, the right hand corner at the back being cut off diagonally by the doorway, and the opposite corner rounded by a turret window filled up with a stand of flowers surrounding a statue of Shakespear. The fireplace is on the right, with an armchair near it. A small round table, further forward on the same side, with a chair beside it, has a yellow-backed French novel lying open on it. The piano, a grand, is on the left, open, with the keyboard in full view at right angles to the wall. The piece of music on the desk is "When other lips." Incandescent lights, well shaded, are on the piano and mantelpiece. Near the piano is a sofa, on which the lady and gentleman are seated affectionately side by side, in one another's arms.

The lady, Grace Tranfield, is about 32, slight of build, delicate of feature, and sensitive in expression. She is just now given up to the emotion of the moment; but her well closed mouth, proudly set brows, firm chin, and elegant carriage show plenty of determination and self respect. She is in evening dress.

The gentleman, Leonard Charteris, a few years older, is unconventionally but smartly dressed in a velvet jacket and cashmere trousers. His collar, dyed Wotan blue, is part of his shirt, and turns over a garnet coloured scarf of Indian silk, secured by a turquoise ring. He wears blue socks and leather sandals. The arrangement of his tawny hair, and of his moustaches and short beard, is apparently left to Nature; but he has taken care that Nature shall do him the fullest justice. His amative enthusiasm, at which he is himself laughing, and his clever, imaginative, humorous ways, contrast strongly with the sincere tenderness and dignified quietness of the woman.

GRACE (responding affectionately). My darling. Are you happy?

CHARTERIS. My heart's love. (He sighs happily, and takes her hands in his, looking quaintly at her.) That must positively be my last kiss, Grace, or I shall become downright silly. Let us talk. (Releases her and sits a little apart from her.) Grace: is this your first love affair?

GRACE. Have you forgotten that I am a widow? Do you think I marriedTranfield for money?

CHARTERIS. How do I know? Besides, you might have married him not because you loved him, but because you didn't love anybody else. When one is young, one marries out of mere curiosity, just to see what it's like.

GRACE. Well, since you ask me, I never was in love with Tranfield, though I only found that out when I fell in love with you. But I used to like him for being in love with me. It brought out all the good in him so much that I have wanted to be in love with some one ever since. I hope, now that I am in love with you, you will like me for it just as I liked Tranfield.

CHARTERIS. My dear, it is because I like you that I want to marry you.I could love anybody—any pretty woman, that is.

GRACE. Do you really mean that, Leonard?

CHARTERIS. Of course. Why not?

GRACE (reflecting). Never mind why. Now tell me, is this your first love affair?

CHARTERIS (amazed at the simplicity of the question). No, bless my soul. No—nor my second, nor my third.

GRACE. But I mean your first serious one.

CHARTERIS (with a certain hesitation). Yes. (There is a pause. She is not convinced. He adds, with a very perceptible load on his conscience.) It is the first in which I have been serious.

GRACE (searchingly). I see. The other parties were always serious.

CHARTERIS. No, not always—heaven forbid!

CHARTERIS (recoiling). Who told you that? (She shakes her head mysteriously, and he turns away from her moodily and adds) You had much better not have asked....