The Pearl of Love or, Josey's Gift 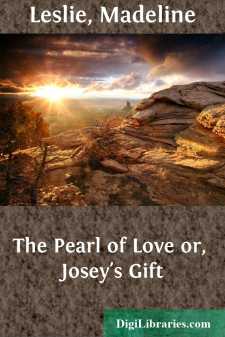 "Please mamma, may I go to ride with you?" asked little red-cheeked Josey Codman.

Mamma was tying on baby's silk hood, and did not answer for a minute.

"I would let him go," urged Aunt Fanny. "He can sit between us; and he wont be a bit of trouble."

"Can Nurse get him ready quick enough?"

"Yes, indeed! Run, Josey, for your new hat. Nurse bring his sack from the hall. It's fortunate I curled his hair before dinner. It's all dry now; come, pet, stand still while I baste in a clean ruffle."

Baby Emma didn't like so many wrappings around her neck, and began to throw back her head in an alarming manner. Mamma gave her to Nurse to carry about, while she put on her bonnet. Then the carriage drove to the door. Papa had to be called from his study. Nurse scrabbled on her hat and shawl, and at last they were all seated in the back, and the driver cracked his whip, calling out to his horses,—

"I should think so," answered mamma, laughing. "I don't know as it was best, we shall be out late."

"Nurse," began mamma, "you must be careful what Josey eats for supper; only bread and butter, with a cup of milk."

"And if he grows sleepy before service is through, take off his jacket and let him go to sleep. You will be in Mrs. Reed's nursery."

"Baby's asleep, so soon," said Aunt Fanny, watching the infant's head nodding over Nurse's shoulder. "Lay her down. She'll sleep all the way, and be as good as a kitten."

"Don't let her soil her new cloak, Nurse," said mamma. "Fanny, the cloak looks beautifully! handsomer than I thought it would."

Mamma and aunty were on the back seat, with Josey tucked in between them; papa and Nurse, opposite. Papa turned from one to another as they spoke; but he did not listen to a word that was said. There was to be a great meeting in the Tabernacle Church that evening, and he was to preach. As they rode along, his mind was fixed on what he was going to say.

Mr. and Mrs. Codman did not always live near the great city where they were now going. Their home was more than a thousand miles away; but they had come here to reside for a year or two, and had rented a pretty cottage nearly ten miles from town.

On three sides of the cottage, there was a piazza, with pillars all covered with woodbine and honeysuckle. In the barn at the end of the garden, was a horse which the clergymen used for his daily ride to the Post Office. When they went to town, they always hired a hack from the stable.

Mr. Codman was a very learned man, as well as a faithful, devout minister. Everybody loved him, for he loved everybody, but especially little children....