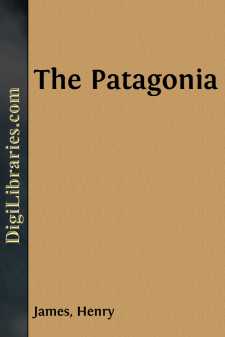 The houses were dark in the August night and the perspective of Beacon Street, with its double chain of lamps, was a foreshortened desert.  The club on the hill alone, from its semi-cylindrical front, projected a glow upon the dusky vagueness of the Common, and as I passed it I heard in the hot stillness the click of a pair of billiard-balls.  As “every one” was out of town perhaps the servants, in the extravagance of their leisure, were profaning the tables.  The heat was insufferable and I thought with joy of the morrow, of the deck of the steamer, the freshening breeze, the sense of getting out to sea.  I was even glad of what I had learned in the afternoon at the office of the company—that at the eleventh hour an old ship with a lower standard of speed had been put on in place of the vessel in which I had taken my passage.  America was roasting, England might very well be stuffy, and a slow passage (which at that season of the year would probably also be a fine one) was a guarantee of ten or twelve days of fresh air.

I strolled down the hill without meeting a creature, though I could see through the palings of the Common that that recreative expanse was peopled with dim forms.  I remembered Mrs. Nettlepoint’s house—she lived in those days (they are not so distant, but there have been changes) on the water-side, a little way beyond the spot at which the Public Garden terminates; and I reflected that like myself she would be spending the night in Boston if it were true that, as had been mentioned to me a few days before at Mount Desert, she was to embark on the morrow for Liverpool.  I presently saw this appearance confirmed by a light above her door and in two or three of her windows, and I determined to ask for her, having nothing to do till bedtime.  I had come out simply to pass an hour, leaving my hotel to the blaze of its gas and the perspiration of its porters; but it occurred to me that my old friend might very well not know of the substitution of the Patagonia for the Scandinavia, so that I should be doing her a service to prepare her mind.  Besides, I could offer to help her, to look after her in the morning: lone women are grateful for support in taking ship for far countries.

It came to me indeed as I stood on her door-step that as she had a son she might not after all be so lone; yet I remembered at the same time that Jasper Nettlepoint was not quite a young man to lean upon, having—as I at least supposed—a life of his own and tastes and habits which had long since diverted him from the maternal side.  If he did happen just now to be at home my solicitude would of course seem officious; for in his many wanderings—I believed he had roamed all over the globe—he would certainly have learned how to manage.  None the less, in fine, I was very glad to show Mrs. Nettlepoint I thought of her.  With my long absence I had lost sight of her; but I had liked her of old, she had been a good friend to my sisters, and I had in regard to her that sense which is pleasant to those who in general have gone astray or got detached, the sense that she at least knew all about me.  I could trust her at any time to tell people I was respectable.  Perhaps I was conscious of how little I deserved this indulgence when it came over me that I hadn’t been near her for ages.  The measure of that neglect was given by my vagueness of mind about Jasper.  However, I really belonged nowadays to a different generation; I was more the mother’s contemporary than the son’s....